Crisis after crisis: the live export industry bears an ugly and volatile history.

As far back as 1985, only a few years after the live export industry began shipping Australian animals overseas to be slaughtered, the Senate Select Committee on Animal Welfare tabled the report, 'Export of Live Sheep from Australia', and concluded:

The trade is, in many respects, inimical to good animal welfare, and it is not in the interests of the animal to be transported to the Middle East for Slaughter... The implementation of reforms will help to reduce but not eliminate stress, suffering and risk during transportation of sheep to the Middle East.The Senate Select Committee on Animal Welfare, 1985

Since then, multiple independent reviews have highlighted the high-risk nature of this cruel trade – such as the Keniry Review of 2003 and the Farmer Review of 2011.

And it’s not only sanctioned cruelty that these animals suffer – they are also at the mercy of a volatile and dangerous trade. Starvation and heat stress while on board ships, trade disputes leaving suffering animals stranded, laws flouted, and animals abandoned to extreme slaughter abuse: the history of live export from Australia is truly shameful.

Conditions on board live export ships are inherently stressful for the animals. Sometimes these vessels are converted from car carriers or ferries, with minimal ventilation or space. Constant rolling motion, extremes of temperature, the risk of mechanical breakdown, injuries from hard concrete and metal decks, and journeys that often last weeks at sea all increase the risks for animals and contribute to unnecessary suffering.

If animals transported within Australia died in the numbers that they do on live export ships, cruelty charges could be laid. But the industry simply accepts these deaths as part of its business model.

The build-up of wet faeces on live export ships can lead to cattle becoming coated in excrement. Apart from being distressing and unhygienic, faecal coated cattle cannot dispel heat through their body surface and are at greater risk of heat stress.

Sometimes this already nightmarish situation erupts into all-out disaster. These are just a few tragic examples of the mass suffering that has become synonymous with live export: 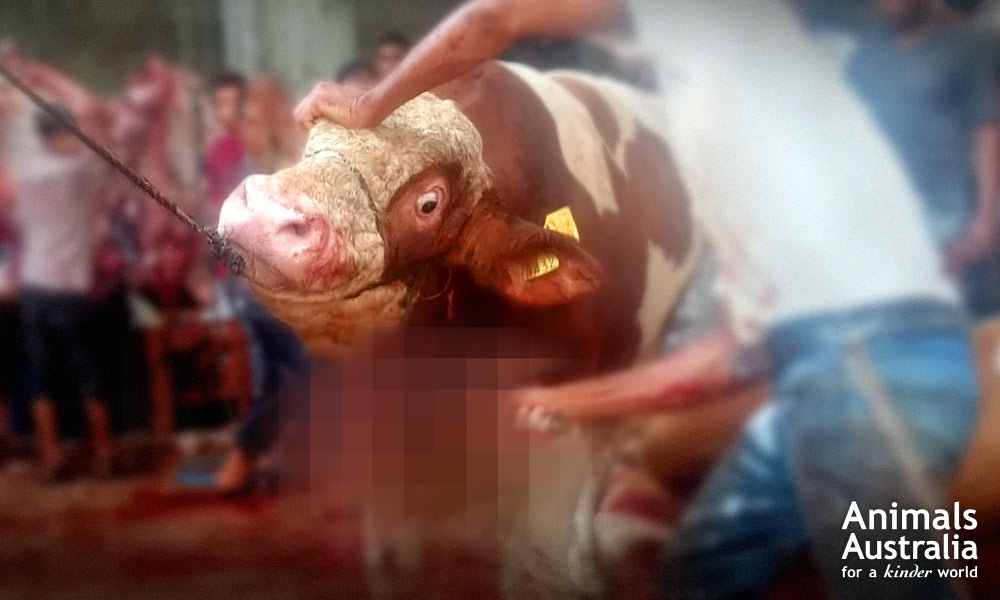 Tragically, the only thing worse than these journeys for animals is what will happen to them at their destination.

Our investigators have witnessed disoriented, terrified animals having their eyes stabbed and tendons slashed prior to slaughter. Such horrific scenes are common ‘disabling’ techniques in places where slaughter workers struggle with large, frightened animals. Live export companies send them anyway.

A charity forced to police the trade

With the Australian Government largely relying on live exporters to self-report breaches of regulations, Animals Australia has continued to be the watchdog of this industry. Our legal team has lodged dozens of formal legal complaints with evidence of ongoing regulatory breaches resulting in terrible cruelty in multiple countries. Government investigations have sometimes taken months or years to come to a conclusion, with grossly inadequate consequences for those responsible: no live export company has ever had its licence cancelled, or even suspended — for repeatedly breaking live export laws. 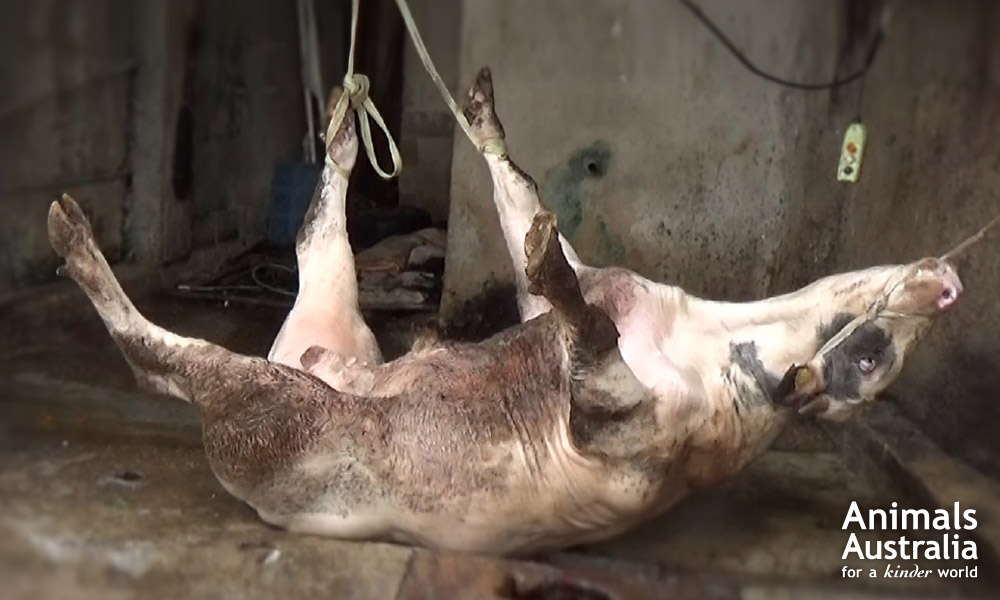 Animals are transported live because their bodies are seen by the global meat industry as a way to transport ‘fresh meat’. These animals are treated like ‘cargo’, not the living, breathing beings that they are. Live export cruelty is a global problem, so our work for animals has extended through our global arm, Animals International.

How you can help

Speak out for animals

Join more than 200,000 caring people around the world by signing the global petition against live export cruelty.

Make sure your local MP knows where you stand on this issue – and that you expect them to speak out on your behalf for animals.

Support our work for animals

All of Animals Australia's critical investigations and campaigns are funded entirely by people in the community who share our vision for a kinder world. Please consider donating today.

By pushing animals into more countries the live export industry aims to encourage people to eat more meat. And at a time when leading health and environmental experts are urging us to reduce meat consumption. Live export is not only cruel but it’s globally irresponsible. 1 in 3 Australians are already enjoying more plant-based meals – it’s simple and delicious to join them with our free veg starter guide, packed full of tips and recipes.