There are a few facts the chicken meat industry doesn't include in their advertisements — and it's easy to see why ... 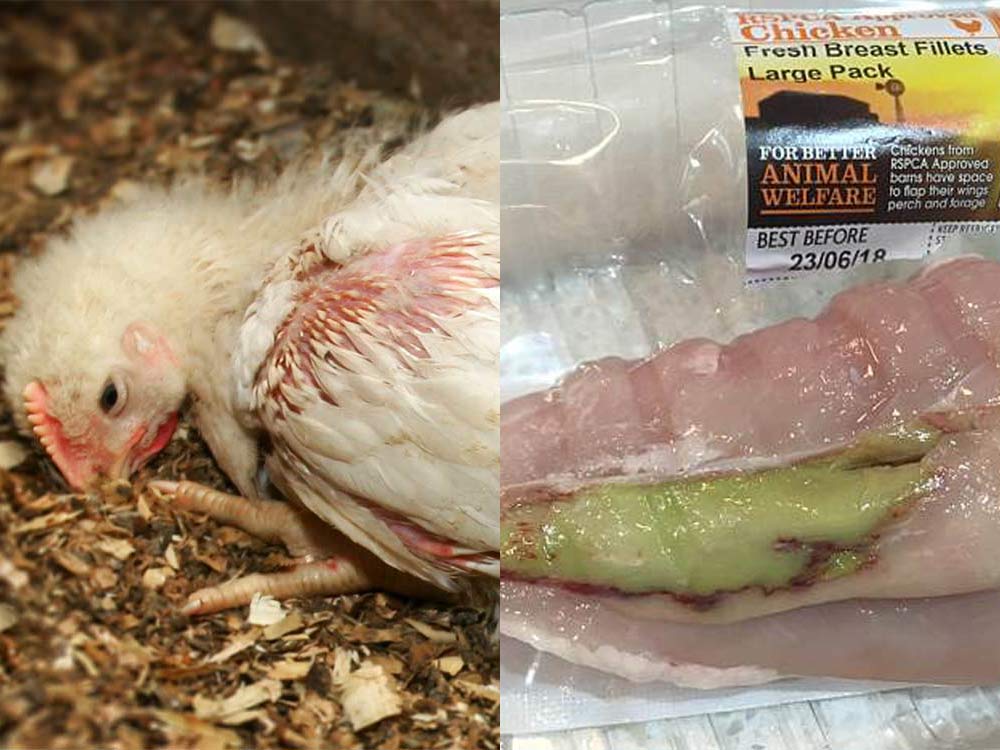 Chickens raised for their meat are just ... unhealthy. The unnaturally fast growth of their bodies coupled with crowded conditions mean they suffer myriad problems, including lameness, respiratory issues, heart problems, disease, chemical burns on their bodies and feet, infections, and of course death. It's not uncommon to see dead and dying birds inside a chicken farm.

In 2018, a customer who bought chicken breast from a supermarket in Victoria, was shocked to dicover green flesh (pictured above. Image: Jamie Ferguson/Facebook). This is known as Deep Pectoral Myopathy (DPM) or green muscle disease and is a result of the unnaturally rapid growth rate meat chickens are forced to undergo. The green flesh is usually cut out during meat processing, or the meat 'downgraded'. Chickens are well-known for being talkative, and scientists have identified over 24 distinct noises that adult chickens use to communicate different things, such as danger or food and how they are feeling.

But meat chickens have been selectively bred to grow so big so fast that they reach slaughter weight at just 35 days old — when they are still 'cheeping' and long before they learn to cluck, growl, murmur, coo or develop their own 'egg song'. We've pixelated this image as it's quite graphic — if you would like to see the original photo, click here.

In Australia, antibiotics may be given to chickens as a ‘preventative measure’, as is common practice globally when high numbers of animals are kept in close confinement.

In an intensive chicken rearing facility if you get one or two animals that get an infection, it's quite common for vets to decide they need to treat all the chickens in the facility just in case it has already spread to others that are not noticeably sick.Professor Christopher Thomas, Birmingham University, June 2013

You have to wonder about a system that at times requires tens of thousands of animals to be dosed up on antibiotics in an effort to stem the outbreak of disease ... In Australian factory farms, it’s legal to keep tens of thousands of chickens in a single shed. From the time they’re put there as tiny chicks to the day they’re caught and killed, the litter under them will not be cleaned. Because bird waste is acidic, this build-up of ammonia can then cause painful burns on their bodies – and a build-up can make it difficult for a person to breathe within only a few minutes. Imagine what it must be like for those chickens who have to live their whole lives in there ... There’s nothing quite as unhygienic as a shed jam-packed with sick chickens living in their own filth. So once the birds are killed, their bodies are commonly washed with chlorine to get rid of the nasties like E. Coli, salmonella and campylobacter, which can make people pretty darned sick. According to Food Standards Australia New Zealand, an estimated 8 out of 10 portions of raw chicken meat in Australia are contaminated with intestinal bacteria that could cause food poisoning. It’s pretty damning that the ‘farming’ system implemented by the chicken meat industry results in the death of around 20 million chickens in the sheds each year. In the pursuit of profit, the chicken meat industry has condemned millions of chickens to suffer greatly; particularly those who have to cope with painful and debilitating lameness. Their bodies become so large, so quickly that many will also die from respiratory and heart problems, or from not being able to walk to food and water. But for the industry the equation is simple — if the extra weight on birds who make it to slaughter brings in a greater profit than they lose in dead birds, then it's good for business. These tragic deaths are factored into the economics of the industry. Shortly after chicks destined to be sold for their meat hatch, they're 'sorted' into groups — 'viable' and 'unviable'. While the former will be condemned to a short life (most likely in a factory farm) the latter are considered worthless. Millions of tiny chicks who fall into this category are killed by either gassing or being dropped into a 'maceration' machine and ground up alive. This is just the 'cost of doing business' for the chicken meat industry — and this practice is entirely legal in Australia.

Our friends from Anonymous for Animal Rights in Israel recently documented the terrible fate of these 'worthless' chicks in a world-first investigation. Aussie Farms and Animal Liberation NSW subsequently captured this brutal practice for the first time inside an Australian hatchery. Learn more about their investigation here.

A note about ‘free range’ chickens ...

Free range chicken may sound better ... but in reality there is no legal definition of this term and so standards can vary enormously. Even in the ‘best’ free range systems, chickens are usually genetically the same and grow at an unnatural rate, and thus are prone to many of the same welfare issues as chooks in factory farms. Additionally – and importantly – the Free Range Egg and Poultry Association requirements state that the birds have to be ‘fully feathered’ before they have access to outdoors, at 3 weeks old. But as they will be killed between 4-6 weeks old, ‘free range’ chickens may only have access to the outside for one week of their lives.

Ultimately both ‘factory farmed’ and ‘free-range’ animals are trucked to the same slaughterhouses — and for chickens killed for their meat, this process is particularly terrifying. Once these young birds reach 'slaughter weight', chicken catchers will grab them by their legs, stuff them into plastic crates, and transport them in all weather conditions to the slaughterhouse. Some abattoirs will use gas chambers to kill the birds, and at other slaughterhouses an electrified bath is used to 'stun' the animals before their throats are cut. Many chickens may arrive with dislocated hips and fractures only to be strung up painfully by their legs and forced to hang upside-down in metal stirrups, as a conveyor belt carries them through the bath, and towards an automated knife. And that's when things go 'well'. It doesn't always — as investigations inside Australian abattoirs have revealed.

In terms of suffering, and sheer numbers, chickens killed for meat represent one of the biggest animal welfare issues in the world today. In the pursuit of profits, these animals have been born (well, hatched) only to suffer. But it doesn’t have to be this way.

Now that you know, the power is in your hands. Refusing factory farmed products is an important first step. But to end the systematic abuse of these intelligent and sensitive animals, chickens urgently need caring consumers to also make the choice to consume fewer animal products.

Every person who replaces some or all of the chicken meat they eat with animal-friendly alternatives helps reduce the demand that has forced chickens to endure such suffering, bringing chickens a step closer to a kinder world. And these days, it’s easier than ever.

Special thanks to Tamara Kenneally Photography, Aussie Farms and Anonymous for Animal Rights for some of the images used in this feature.