Salmon farms are emptying our oceans to feed their fish

Salmon are a carnivorous species and fish farms rely on wild caught 'forage' fish to feed them. Australia's largest salmon farmer, Tassal, currently uses 2 kg of wild caught fish, such as anchovies and sardines, to produce just 1 kg of farmed salmon. There's no other way to say it — it's food production in reverse.

Whilst scientists are warning that commercial fishing could see fish populations collapse by 2048, millions of wild fish are being caught and killed to feed fish in farms. More than 15 million tonnes of wild caught fish were turned into 'fishmeal' in 2014.

It gets worse. The Southern Bluefin Tuna, farmed in South Australia, also rely on wild caught fish for feed. The Australia Marine Conservation Society suggest that it can take between 10 and 20 kgs of wild caught fish to produce just 1 kg of tuna. What's more, commercial tuna farms around the world rely on the capture of young tuna from the wild, which are then 'fattened up' in pens. Southern Bluefin Tuna have been classified as 'critically endangered', with populations down to around 5% of their original levels. Yet fishing continues. 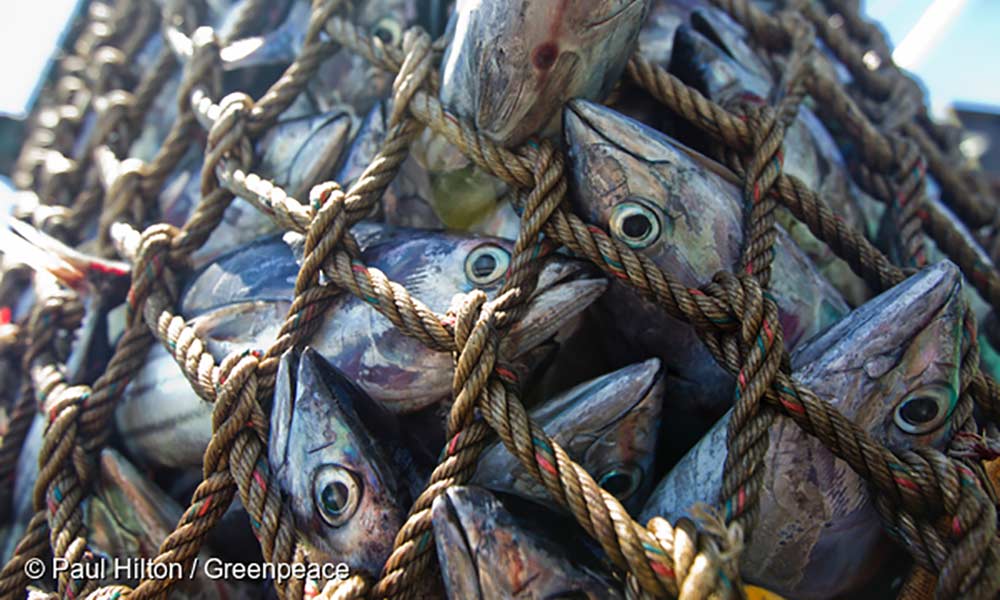 The ecological impacts are not the only reason we should be concerned about fish farms. Just like animals in factory farms, fish in fish farms live a cramped and stressful life. In fact, research on salmon in farms has found that 1 in 4 experience brain chemistry and behaviour identical to that of severely depressed people, and can be seen floating lifelessly at the surface.

The crowded environments are also a risk for the physical health of these fish. Disease is common and can spread rapidly. But instead of giving fish more space, many farms instead feed them antibiotics, which the World Health Organisation has warned is contributing to the threat of antibiotic-resistance in humans (ie. 'superbugs'). Whilst around the world and here in Australia, farms are trying to reduce or eliminate antibiotics in farmed animals, Tassal recently made headlines for quadrupling its use of antibiotics in fish.

Scientists have warned that our marine life is being fished to the brink of extinction. One study has predicted that our ocean life will have collapsed by 2050. And it's not just fish who are being pulled out of our oceans. All kinds of marine life, including seals, sharks and dolphins are caught in fishing nets, and thrown back into the sea, often dead or dying. 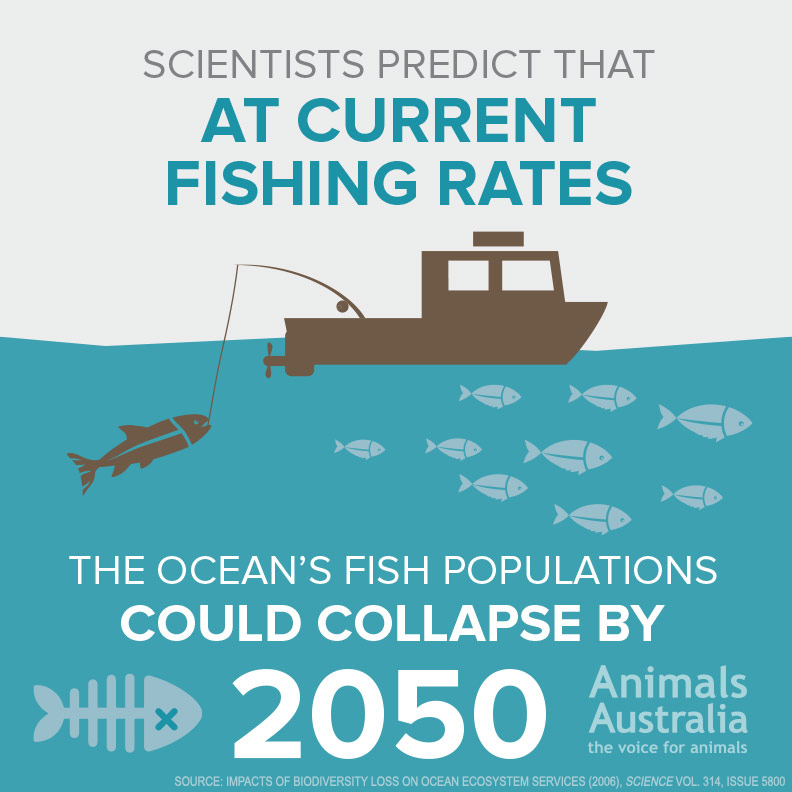 In the past, environmentally-conscious people might have turned to farmed fish in an effort to preserve our oceans and marine life. But given the strain that 'fishmeal' for farmed fish puts on our oceans, the opposite is true. The most powerful thing an individual can do for our oceans is to avoid eating fish altogether.

Sadly, animals consuming more food than they produce is all too common in the food industry. Farmed land animals consume an average of 6 kg of plant protein for every 1 kg of animal protein they produce. The Union of Concerned Scientists estimate that one third of the world's cereal harvest is being fed to farmed animals — enough to feed about 3 billion people.

What is the sustainable option?

The good news is that there is a way to protect our marine life, and better use our world's resources — by enjoying the abundance of plant-based food that's right at our finger tips. 1 in 3 Australians are already turning to kinder, sustainable plant-based meals. Eating plant-based reduces your environmental impact and spares animals from cruelty, and can provide all the nutrients your body needs to thrive including omega 3.

Keen to find out more? You'll find all the information you need, plus a selection of delicious recipes, in our free veg starter kit! Order your copy here. Or if you're ready to get cooking right away, then you might like to browse our collection of 100+ scrumptious plant-based recipes at VegKit.com!

Soon you'll be able to eat meat without hurting animals!

Kindness is on the menu with our #1 selling cookbook: Taste for Life

The animal-lover's guide to barbecuing