Australia's racing industry continues to avoid addressing the root cause of mass horse slaughter — and in doing so, condemns more horses to death.

In the lead up to the 2021 horse racing season, the Australian racing industry is hopeful that we have forgotten – forgotten the death of Anthony Van Dyck who broke down mid-race at the 2020 Melbourne Cup, and forgotten the explosive evidence of mass horse slaughter and cruelty – but we have not.

Following the exposé, the industry responded with feigned shock and horror that its 'beloved' horses were ending up at notorious slaughterhouses - not only was it revealed that the industry knew about the killings, but also that horses were being sold directly to kill buyers by horse racing trainers.

In an attempt to appease the outraged public, and undoubtedly nervous sponsors in the lead-up to its biggest event of the year, Australian horse racing reps made a couple of announcements — no doubt hoping they sound just good enough that people will forget the images of terrified horses being kicked, sworn at, and thrashing desperately in bloody kill boxes that aired on ABC's 7.30.

But before we get into what they promised, there's something really important we need to talk about — something the industry desperately wants to avoid talking about because it's absolutely fundamental to the systemic issue of ex-racehorse slaughter: overbreeding. Here's the problem:

That works out to be a LOT more horses bred for racing than anyone knows what to do with.

The breeding process is ruthless — in pursuit of finding the rare 'champion', thousands upon thousands of horses will be born into an industry only to 'disappear' if they don't win enough races to turn a profit for their owners.

It's a huge problem — a systemic one in fact, and it's not one the racing industry wants to talk about because it knows that addressing overbreeding will mean cutting significantly into its hefty gambling profits.

They breed so many horses hoping they're going to find the next Winx or Black Caviar.Elio Celotto, Coalition for the Protection of Racehorses

So instead of doing what it should be doing — what it knows could actually result in meaningful, long-term improvements to the longevity of the animals its billion-dollar profits rely upon — the Australian racing industry's Victorian arm has announced;

While the industry gives itself a pat on the back for establishing a fund that it purports will help 'support the wellbeing of racehorses across all stages of their lives' — it must know that while breeding numbers remain so high that this is in fact impossible. That's because there are simply not enough good homes for so many thousands of unwanted horses to go to once their use to the racing industry has expired.

Unless the number of horses being bred by the industry drastically reduces, healthy horses and foals will continue to die.

Mass horse slaughter has long been accepted by the horse racing industry as the 'cost of doing business'. This is an industry that continues to defend the practice of whipping exhausted animals and the use of barbaric 'tongue ties', while ignoring the fact that at least one horse dies every 2.5 days on Australian racetracks and that seven horses have died in the last eight Melbourne Cup races alone. It is unsurprising that this gambling industry continues to avoid addressing the underlying problem, and has even claimed that sometimes a slaughterhouse is "the best welfare outcome" for the horses who no longer turn a profit. 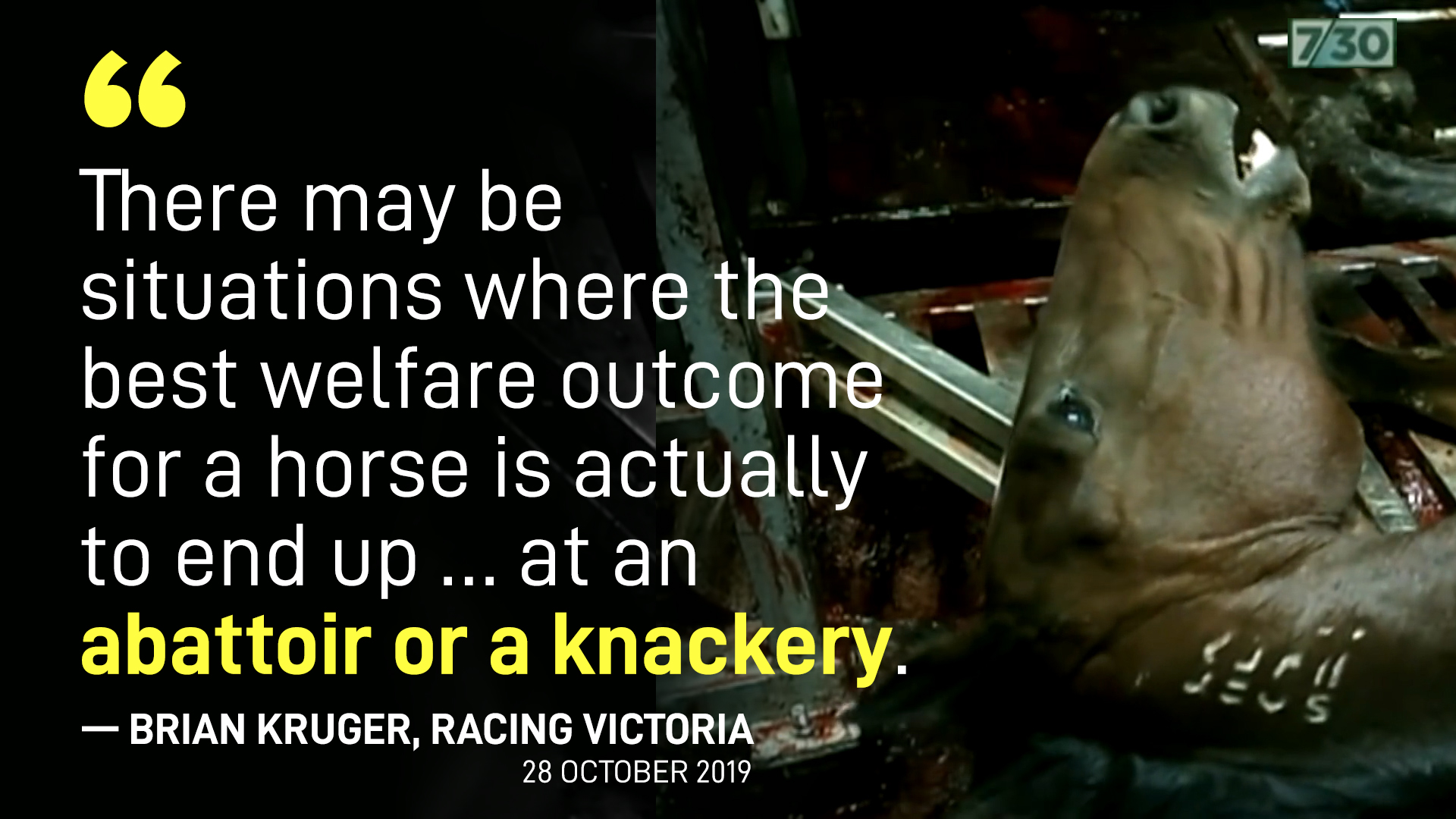 As we have seen with the inherent cruelty and mass-slaughter of dogs in Australia's greyhound racing industry, gambling money and animals are a toxic mix. As long as these industries are allowed to continue treating animals as commodities rather than the thinking, feeling, loving individuals that they are — horses and dogs will continue to suffer and die.

Join the calls to end horse cruelty by encouraging some of the racing industry's biggest sponsors to love horses — not racing! Take action today:

Speak up for horses »

5 ways to celebrate on Cup Day without hurting horses