A chicken can be just 5 weeks old when he is killed for his meat, but he'll have the body of an adult bird and many of the ailments that come with it. This unnatural growth rate is the result of decades of selective breeding that has put industry profits ahead of the wellbeing of animals.

In commercial chicken farming, the chickens have just one 'job' — to gain weight. And everything — from the conditions they're kept in, to selective breeding over generations — has been carefully manufactured to create a business model where chickens become as 'meaty' as possible, as quickly as possible.

The consequences of this rapid and unnatural growth are dire for many birds. As their bodies grow too quickly, walking and even standing can become difficult due to lameness or dislocated joints. 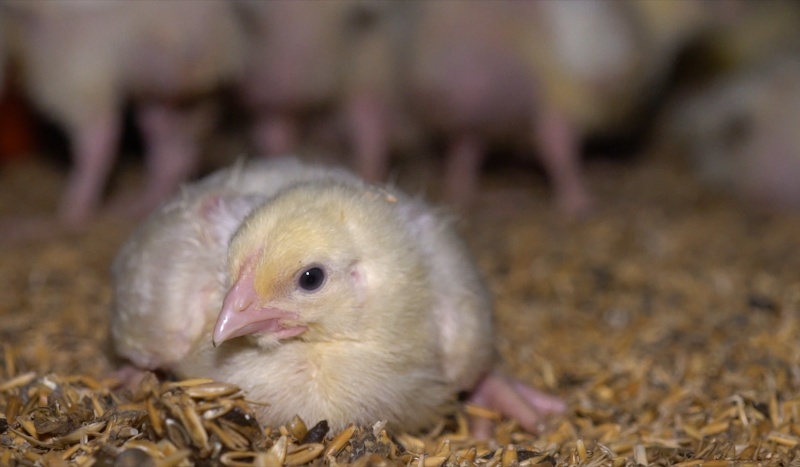 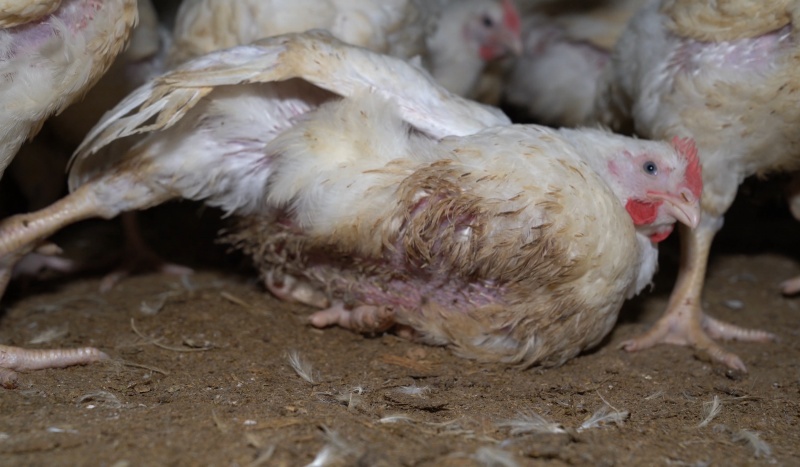 'Meat' chickens are killed at only weeks old. Their short lives are full of suffering.

Modern chickens are effectively born into a genetic prison. Their bodies are their cages. Their health and welfare are so compromised that their likelihood of survival (or not) is built into the economics of running a chicken farm.

For those who do, the sheds where they will live out their short, painful lives provide no space or enrichment to enable natural behaviours such as perching, or cleaning feathers by dust-bathing. Sheds typically hold around 40,000 chickens and industry standards allow birds to be kept at (approx.) 20 per square metre, affording each animal the space of about an A4 piece of paper (estimate based on the legally permitted 40kg weight per square metre of shed).

And carefully manipulated lighting makes it nearly impossible for the birds to properly rest. That's because it's often not dark for very long — but it's not very light either. The dim light is meant to keep chickens docile, as too much movement will exercise off their 'meat'. But sleep isn't 'desirable' either, because that's valuable time chickens should be eating and putting on more weight. Incredibly, even in the updated draft welfare standards for chickens, there is still no requirement to provide birds with an appropriate amount of time in continuous darkness. 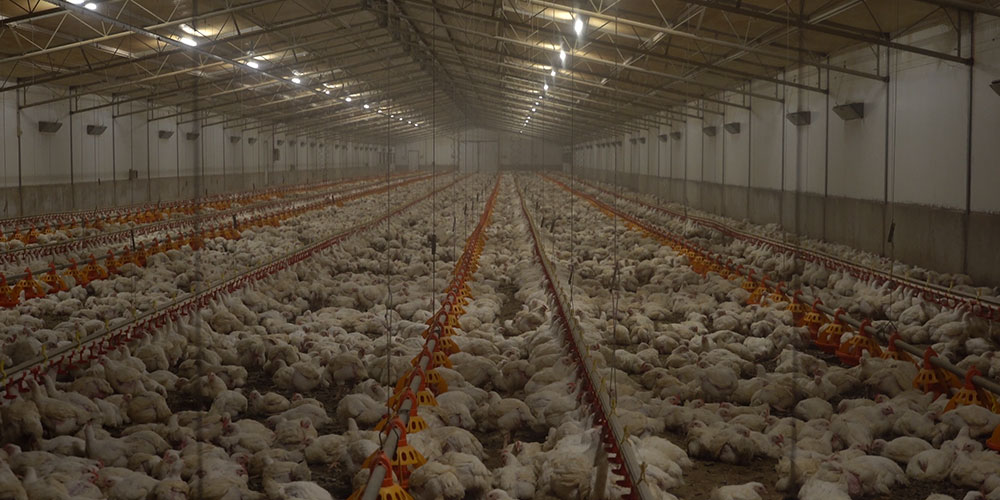 For the short, painful weeks they're alive, most chickens farmed for meat in Australia won't even feel fresh air or see the sky.

It's fair to conclude that this modern phenomenon of 'cheap chicken' has come at an enormous cost to the welfare of the birds. And not only those raised for their meat. Research has found that the parents of these chickens — called 'breeding stock' — live in a state of chronic stress. That's because they've been genetically selected to always be hungry, but laws allow them to be fed only every second day.

'Skip-a-day feeding' is an industry practice to extend the life and reproductive capacity of an animal whose body is a 'ticking time bomb' — and not designed to last for very long. Even 'meat' chickens rescued from factory farms will rarely survive beyond a year.

Standard factory farm conditions and selective breeding have combined to create the perfect storm of animal cruelty. But this method of farming chickens also presents a risk to human health. Disease is so common that many farms dose the water supply with antibiotics, risking the creation of antibiotic-resistant 'superbugs'.


The volume of antibiotics used in animals is continuing to increase worldwide, driven by a growing demand for foods of animal origin, often produced through intensive animal husbandry. Scientific evidence demonstrates that overuse of antibiotics in animals can contribute to the emergence of antibiotic resistance.Dr Kazuaki Miyagishima, World Health Organization

What about free range?

The question is often asked, 'what about free range'? While birds in free range systems may be provided with more space and enrichment, they are often still the same fast-growing breed with all the associated ailments and will still spend most of their life inside. That's because such young birds cannot regulate their body temperature so they must be 'fully feathered' before they go outdoors — usually at around 3 weeks old.  But as they will be killed between 4 and 6 weeks old, 'free range' chickens may only have access to the outside world for a couple of weeks of their life.

Ultimately, both 'factory farmed' and 'free-range' animals are trucked to the same slaughterhouses  — and for chickens killed for their meat, this process is particularly terrifying. 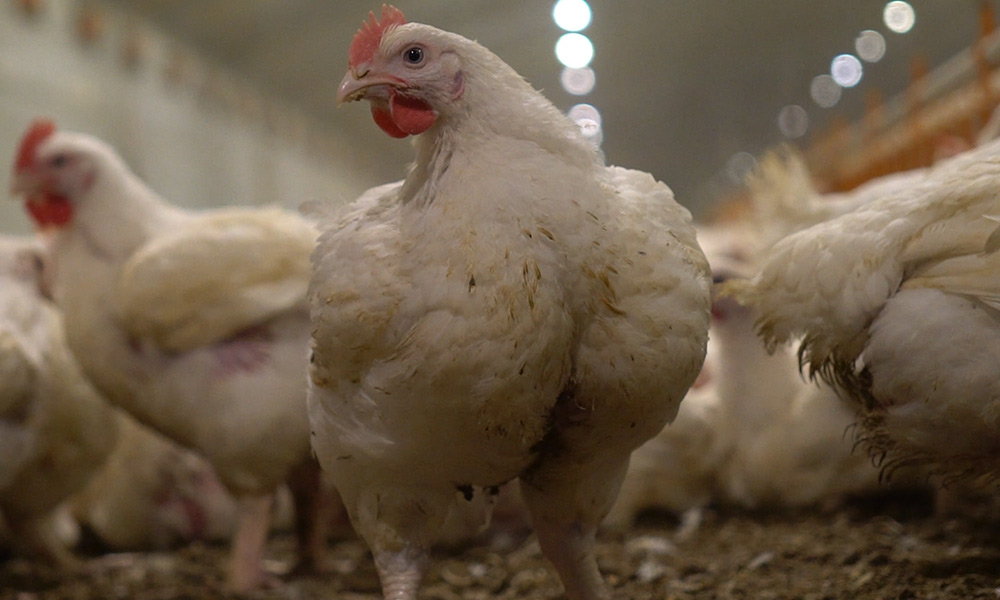 At only weeks old but the size of an adult, young chickens raised for meat will be crammed into crates and sent to the slaughterhouse.

In terms of suffering, and sheer numbers, chickens killed for meat represent one of the biggest animal welfare issues in the world today. These animals have been born only to suffer. But it doesn't have to be this way.

Every person who replaces some or all of the chicken meat they eat with plant-based alternatives is helping to reduce the demand that has forced chickens to endure such suffering, bringing them a step closer to a kinder world.

And these days, it's easier than ever. Explore mouth-watering recipes at VegKit.com or order your FREE veg starter kit here:

Get your FREE Veg Starter Kit

All done! Thank you for becoming a part of the Animals Australia online community!

Best recipe of all time?

Brace yourself: the first day on Earth for chickens is terrifying

How to make a chicken wrap