As many Victorians welcome the opportunity to reunite with loved ones following the easing of COVID-19 restrictions, a tiny minority are readying their shotguns, excited by the prospect of blasting native waterbirds out of the sky...

Victoria's brutal 'recreational' duck shooting season has resumed as of 11.59pm on Tuesday, 12 May, with shooters quick to utilise their reinstated freedom of movement to descend upon wetlands in search of ducks to shoot at for 'fun'.

If you're one of the many thousands of people who have spoken out on this issue, thank you. Please don’t think that your efforts have been in vain. In fact, it’s because you’ve taken every opportunity to make your voice heard that Victorian Premier, Daniel Andrews, is now in the minority in his apparent support for duck shooting -- and he is facing mounting internal pressure to change Labor's policy and ban this brutal 'recreational' slaughter of native animals.

This week's announcement comes after many weeks and months of uncertainty around the 2020 season — uncertainty that started long before the ever-evolving coronavirus pandemic put all hunting on an indefinite hold, a measure intended to limit spread of the virus through the state.

After prolonged drought, and waterbird numbers dropping to critical numbers, the Victorian Labor Party voted almost unanimously to review its duck shooting policy in November last year. This was very welcome news to wildlife carers, vets, regional communities, scientists and caring Victorians who have long been calling for native waterbirds to be protected from 'recreational' slaughter — because in order for this to happen, Labor's policy inevitably must change, and this vote was one clear and necessary step towards this.

Still, months passed after this announcement without any indication as to whether a 2020 season would go ahead. As the new year began, large parts of Victoria were engulfed by the devastating bushfire crisis that left millions of hectares of bushland destroyed, and millions of native animals dead. Then in February, while charities and wildlife carers were still scrambling to reach burnt wildlife, the Premier did the unthinkable: authorised the slaughter of native waterbirds for the sake of 'recreation'. A restricted duck shooting season was announced.

So, after years of drought, in the wake of the country’s most devastating bushfire crisis, and against the advice of wildlife experts, scientists, vets, government officials — and we're told even his own environment department — Premier Andrews made the outrageous decision allow a tiny minority of Victorians to open fire on vulnerable wildlife... apparently, because of perceived fears of losing the 'gun vote'.

There's been around about a seventy per cent decline in waterbirds over the past thirty-odd years... if the decline of wetlands continues... the ultimate result of that is extinction of animals.Professor Richard Kingsford, director of the Centre for Ecosystem Science at the University of NSW


Above: Premier Andrews' decision to allow recreational slaughter of native waterbirds goes against the advice of wildlife and conservation experts.

Government sources have said Premier Daniel Andrews is worried about losing a handful of Labor-held marginal seats in regional Victoria, where he perceives support for duck shooting to be strong. It may run deeper than that but media reports indicated that if this decision had been left up to the Environment Minister — as it should be — a duck shooting season would not be going ahead this year.

As the imminent threat of the fires died down, one crisis made way for another and within weeks, the impact of the global COVID-19 pandemic led to widespread control measures being implemented to slow the spread of the virus in Australia. At the beginning of April, it was announced that all hunting and fishing would prohibited in Victoria — and later in the month the official announcement came in that the opening of the 2020 duck shooting season would be delayed while stage three restrictions remain in place.

So the emergency measures put in place to keep Victorians safe were keeping native ducks safe, too.

Every day that restrictions remained in place was another day of safety for the state's dwindling waterbird population, but wildlife advocates knew this was only temporary (and incidental) protection — until there is a decision to permanently ban the senseless slaughter, native ducks will continue to be at risk as this latest announcement has shown.

It will be astonishing to many that while the Premier continues to push the message, 'if you can stay at home, you must stay at home', he is also allowing shooters to travel to regional communities, shotguns in tow, with the sole purpose of killing wildlife. But if you consider the politics at play — that this outrageous decision likely stems from the Premier's fear of losing votes — then a solution becomes a little clearer.

We need to show him that there's nothing politically savvy about siding with those who enter sanctuaries with deadly weapons.

The 2020 Victorian duck shooting season was already limited from the usual period of 12 weeks down to four — and now because of the pandemic, this has been further reduced by another week. While the number of ducks any shooter is 'permitted' to kill has also been reduced, the fact that the vast majority of wetlands are not policed makes these limits fairly redundant. As long as people who equate killing animals with 'recreation' are allowed to enter sanctuaries with deadly weapons, cruelty and suffering is inevitable. And so we will not — we must not — relent until a permanent ban is announced. 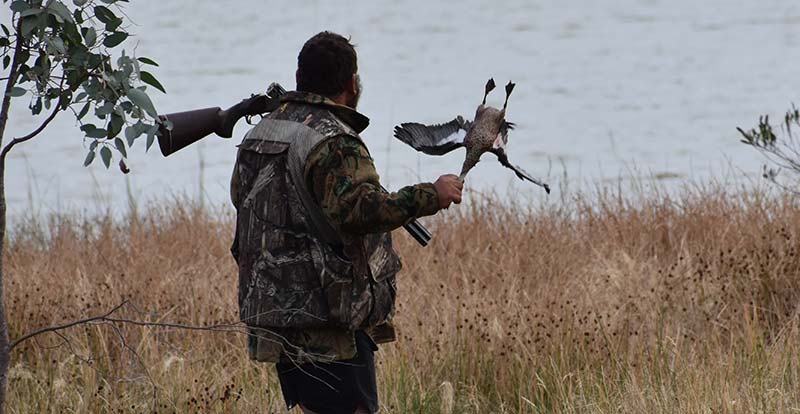 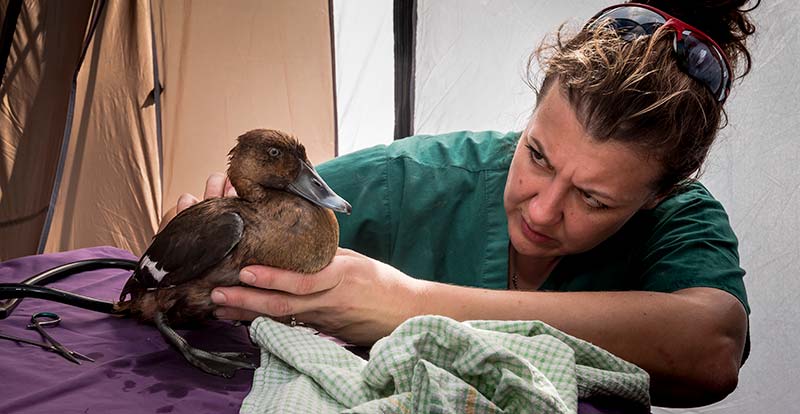 Above: The Premier has abandoned wildlife and the brave vets and wildlife carers who have been working tirelessly in the aftermath of the fires to save lives. Instead, he's siding with the tiny minority who choose to hurt and kill native animals for 'fun'.

After drought, bushfires and now a pandemic, Australians have seen enough suffering and endured enough heartache. Wildlife have never been under such tremendous stress. Delicate wetland ecosystems are in dire need of protection and should remain sanctuaries all year-round — and not just for native waterbirds but for the hundreds of species of wildlife who call these peaceful sanctuaries their home.

It is high time that political leaders represented the interests of their constituents and demonstrated the values that are so desperately needed at this time in our history — community, compassion and courage — instead of bowing down to a tiny minority who wish instead to wreak violence and destruction.

If you share our vision for a future where native animals and their habitats are protected — not destroyed — then please, stay loud on this. Keep speaking up every chance you get, especially over the next few weeks until the 2020 duck shooting season is over.

We will breathe a sigh of relief on the 8th of June, when this season ends and native waterbirds are safe, at least for another year. Until then, we need to be relentless, because they needs us to be.

Please, join us by speaking up today — and demand safety for waterbirds and communities. Here's how you can keep up the pressure over the next few weeks: