The use of whips in Australian horse racing has been proven by scientists to be not only ineffectual — but cruel.

For centuries, racehorses have been whipped by jockeys in the belief that horses need ‘encouragement’ to run faster, and ultimately to win races for their human owners.

In more recent years, the outdated and cruel practice of beating exhausted horses across the finish line has angered many Australians. After the cruelty of whips was exposed on ABC's Catalyst, Racing Australia’s former chief executive, Peter McGauran conceded that if there was evidence that horses were hurt by whips, then “of course, we would do away with the whip.”

But when confronted with said evidence ... he refused to ban the whip, claiming it would be "going too far" and wouldn't be in the "interest of racing."

That's right... not in the interest of racing.

Instead, Racing Australia updated its rules that limited the number of times a horse can be hit during a race from 10 to 5, but allowed horses to be flogged repeatedly in the last 100 metres of a race — when the horse is most tired — in a brutal effort to push the exhausted animal 'over the line'.

Such a blatant disregard for suffering is unsurprising from an industry that ignores the fact that at least one horse dies every 2.5 days on Australian racetracks – and that seven horses have died in the last eight Melbourne Cup races alone.

Watch ABC’s Catalyst to hear the outcome from recent studies on whipping, straight from the horse's mouth:

Experts have called into question the use of whips in horse racing after studies have shown; 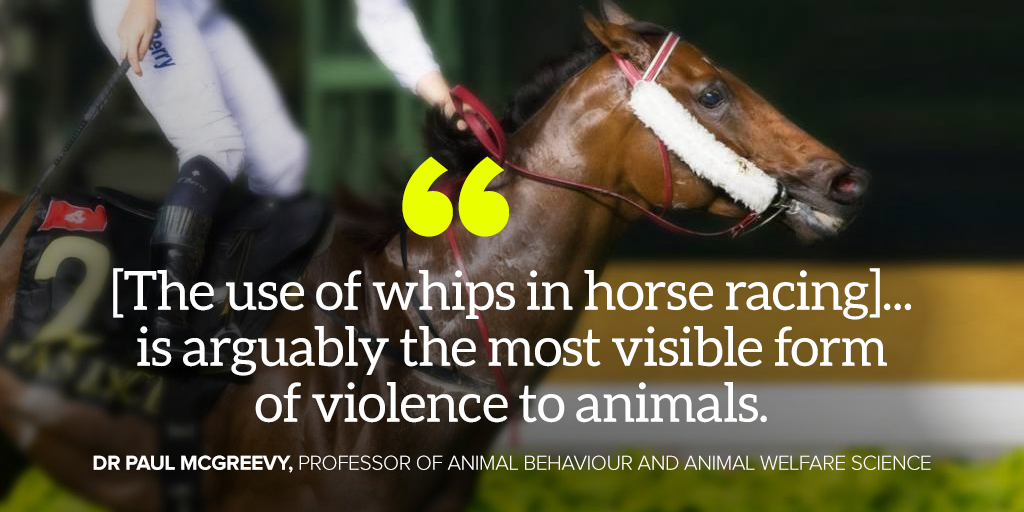 University of Sydney veterinary pathologist and forensics researcher Dr Lydia Tong revealed that horse’s flank skin is not only thinner, but potentially more sensitive to pain than a human's.

Tragically, she also pointed out that, as prey animals, horses have evolved to hide their pain rather than react to it. So even if horses do not react, baulk or ‘shift course’ when they are hit with a whip, this does not indicate that they are not in pain as horse racing participants often claim, but may rather indicate that they simply learned to tolerate it.

If you think it's time that decisions were made that were in the interests of horses — not the ruthless gambling industry — help stop these sensitive animals from suffering in silence by joining the calls to ban the use of whips in horse racing!

5 ways to celebrate on Cup Day without hurting horses