The secret lives of pigs

Pigs are highly intelligent, emotional, unique individuals full of personality and curiosity. But you won’t hear that from the meat industry...

They love belly rubs, wiggle their tails when they’re happy, have unique personalities, enjoy affection and cuddles, and are not only capable of being easily trained but can perform complex tasks and have excellent memories. In all the ways that matter, pigs are no different to dogs who hold a special place in our hearts and homes... but simply because they have been classified as "food" sadly most pigs are denied any quality of life. Here are 13 important reasons to expand your circle of compassion to include pigs: 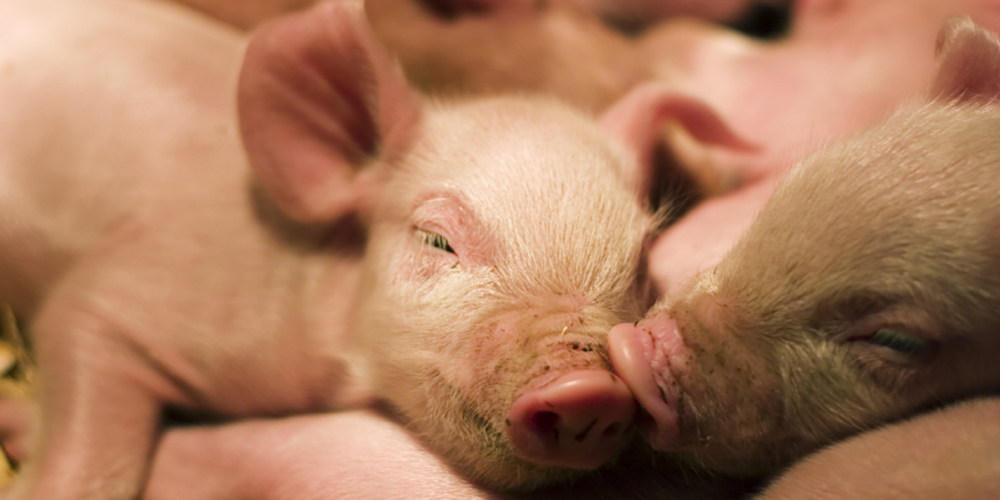 Pigs are smarter than dogs, and can be trained to respond to voice commands, are easily toilet trained, have also solved complex puzzles and even played video games... In fact, they’re smarter than a three year old human child.

{Pigs} have the cognitive ability to be quite sophisticated. Even more so than dogs and certainly three-year-olds.Professor Donald Broom of Cambridge University Veterinary School 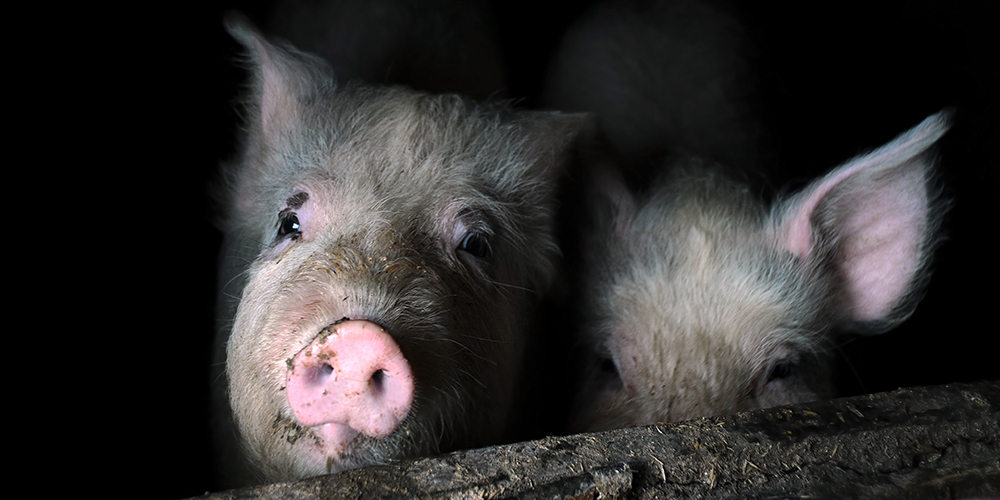 Even young piglets have amazing memories. They will remember the answer to a puzzle more than 6 months after first observing it. This shows a well-functioning long-term memory, according to a study from the Messerli Research Institute of Vetmeduni in Vienna. 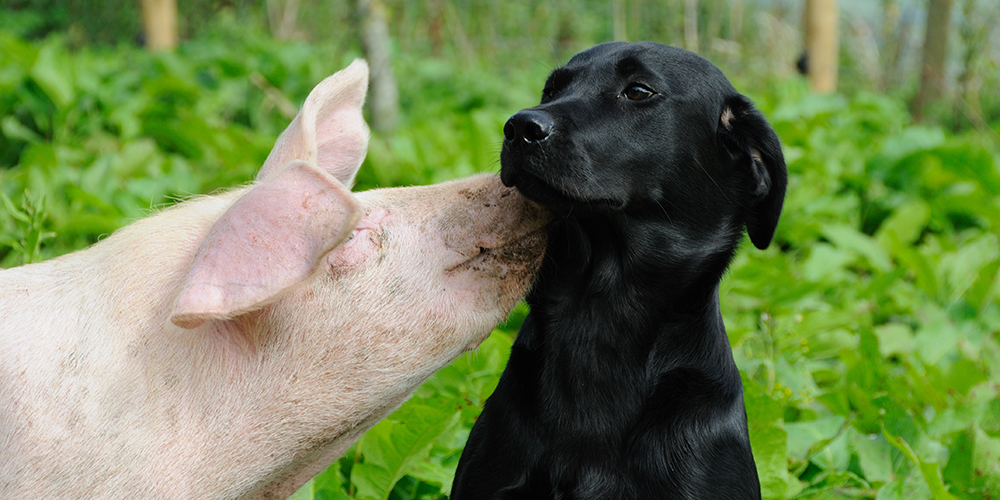 The hormone oxytocin (also known as the 'love' hormone) is released in humans when we do things like hug, and it helps strengthen the bonds between us. When we pet pigs, they release the same hormone over the next several hours. The more interactions with us that pigs get, the more oxytocin the release. 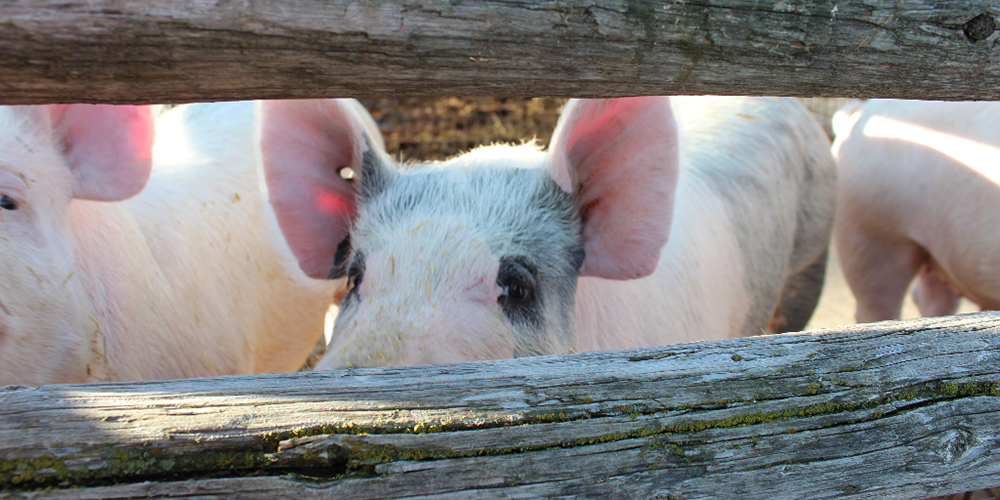 In recent years, scientists have revealed that pigs can sense the passage of time across days at a time. This is especially significant because pigs are one of the world’s most intensively farmed species... and the conditions that the vast majority of pigs are kept in involve severe confinement over long periods of time. Imagine the mental anguish of being confined to a cage the size of your body with no option but to endure the agonisingly slow passing of time... 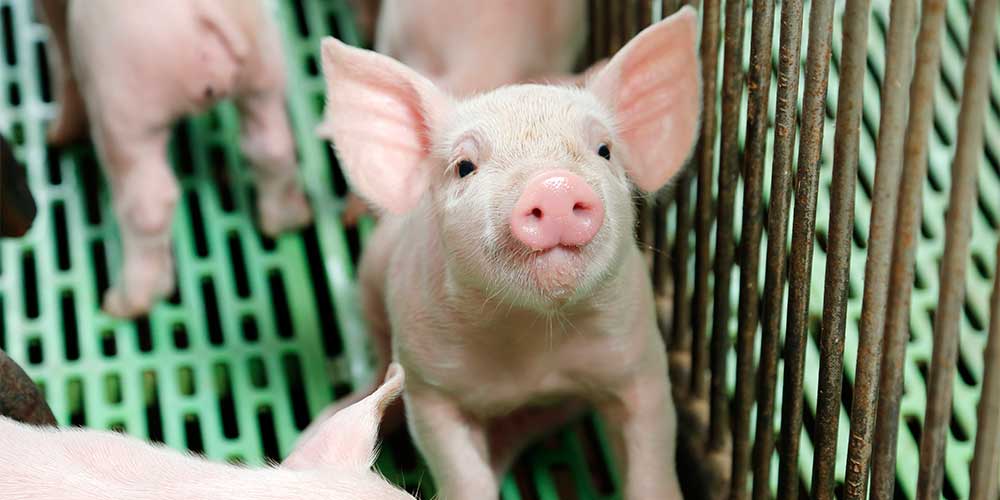 When given sufficient space to live in, pigs will use a toilet area far away from their bedding and food. The misconception that they are in any way dirty is thought to stem from the fact that they will cover themselves in mud to keep cool and protect themselves from the sun. Humans sweat, dogs pant, and pigs will swim or coat themselves in mud... it’s just their way of regulating their body temperature. 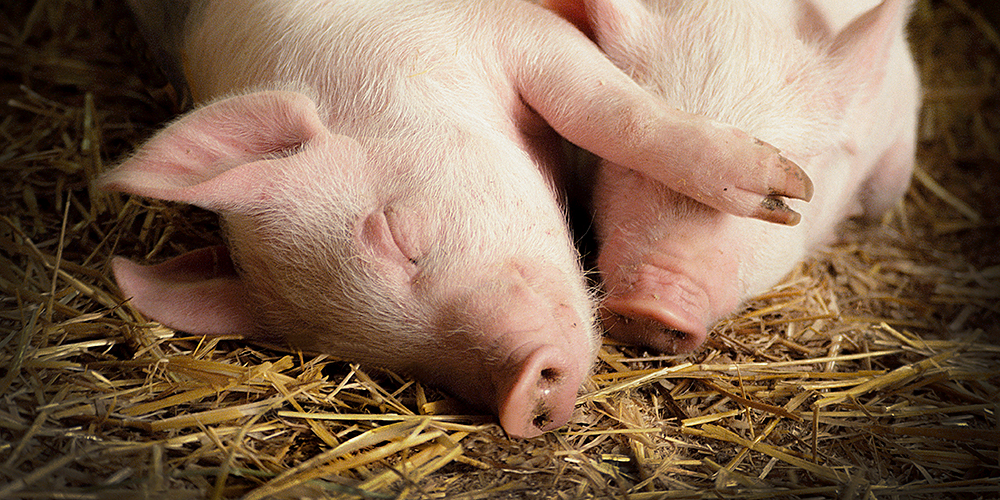 Pigs develop highly complex social structures in their group. At about three weeks old, piglets will start playing with other piglets and it is during this time that strong bonds are formed with others, often lasting the duration of their lives. They will often sleep nose to nose with their closest friends. 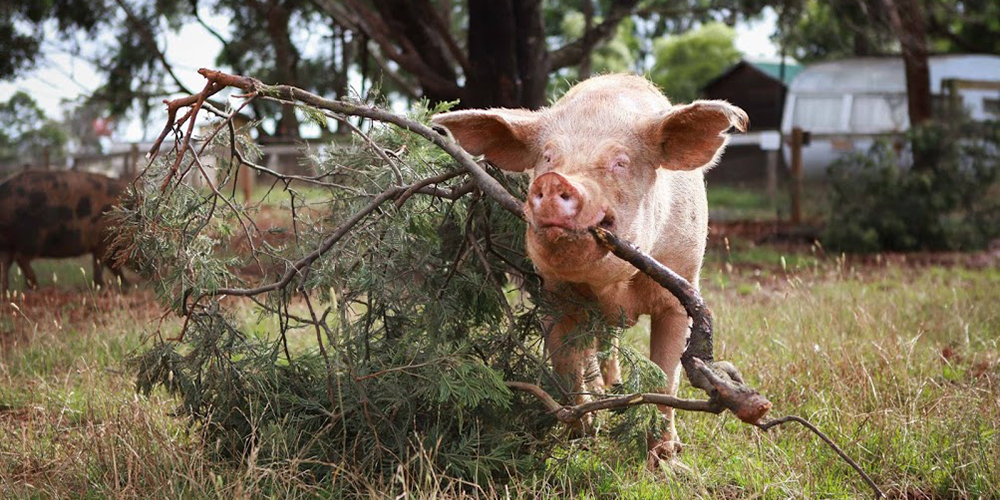 About 24 hours before they’re due to give birth, expectant mums will temporarily leave their group in order to collect branches and soft material to build a nest. 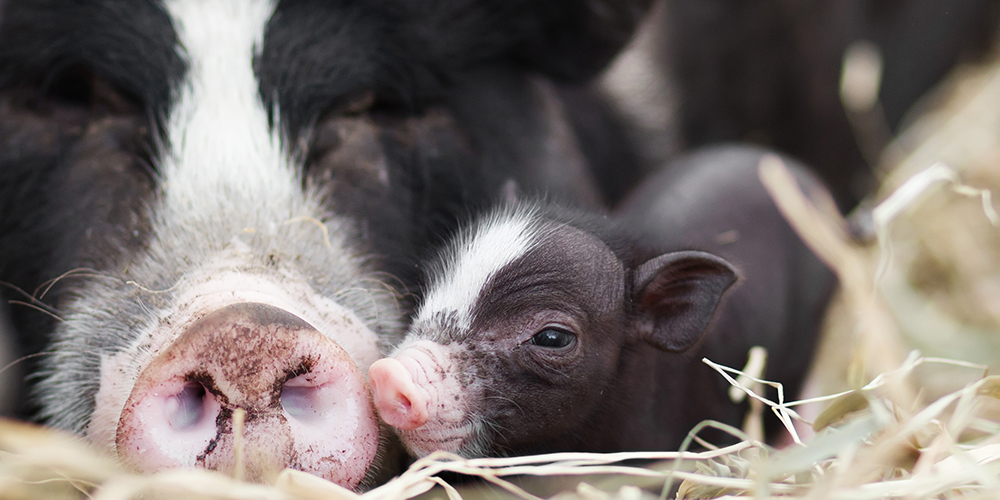 Once she has given birth, her piglets will make their way to her face so that they can touch noses with their mum and get to know each other’s voices. Mother pigs are known to ‘sing’ to their piglets to let them know when her milk is ready (think the pig version of the dinner bell). 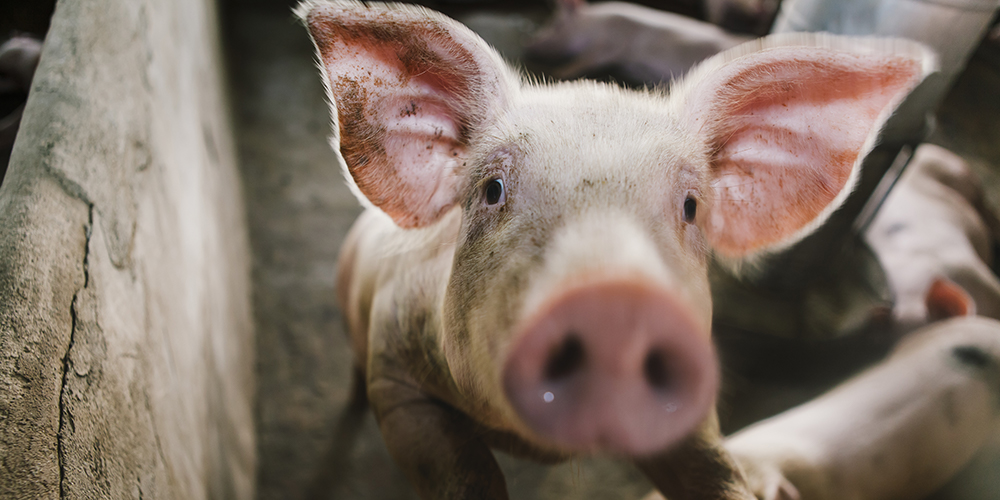 Their snout has as many tactile receptors as a human hand and is a highly specialised and sensitive tool. Much the same as we humans use our hands, pigs use their snouts to investigate and assess the world around them. They will spend most of their time foraging, and their sensitive snout along with an exceptional sense of smell enables them to uncover tasty treats such as seeds, roots and truffles. 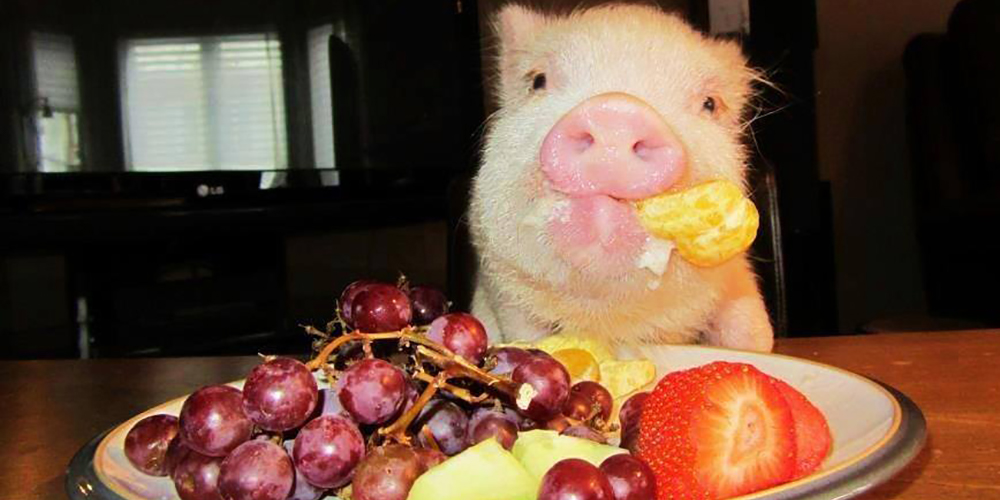 Unlike dogs, or humans for that matter, pigs have a very good sense of control when it comes to food and will never dangerously overeat — even when given access to unlimited food. 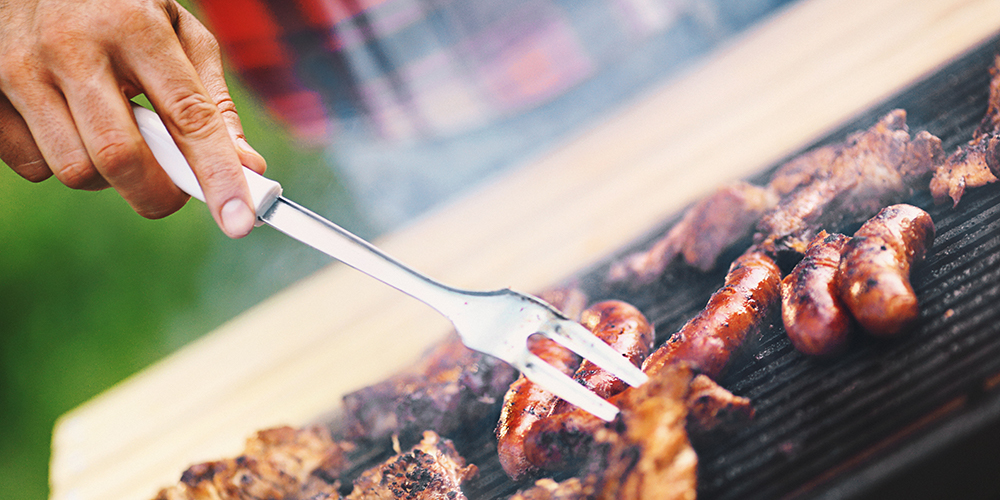 Even small amounts of processed meat (including bacon, sausages, and salami) has been found to increase the chances of cancer. A 2018 review of many studies showed that eating as little as 25 grams of processed meat (or a single rasher of bacon) a day would lead to higher incidences of bowel cancer. Similarly, eating 75 grams (or three slices) of ham a day would also increase the likelihood of contracting cancer. 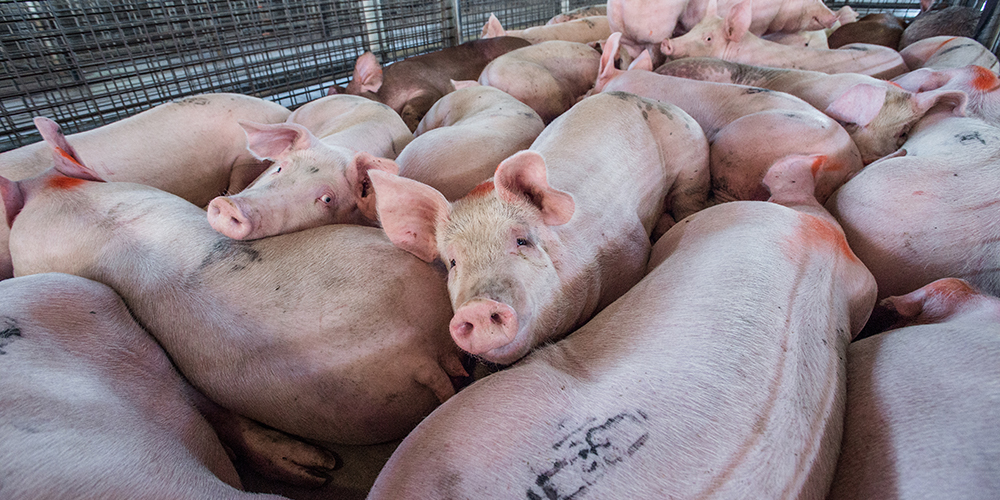 The majority of pigs in Australia are kept in extreme confinement and deprivation. To condemn our beloved pet dog to lifelong suffering like this would undoubtedly cause enormous outcry from the community, and yet pigs — playful, emotional, intelligent and social just like dogs — are denied even the most basic welfare requirements like being able to move freely. Many will never even see the sun. 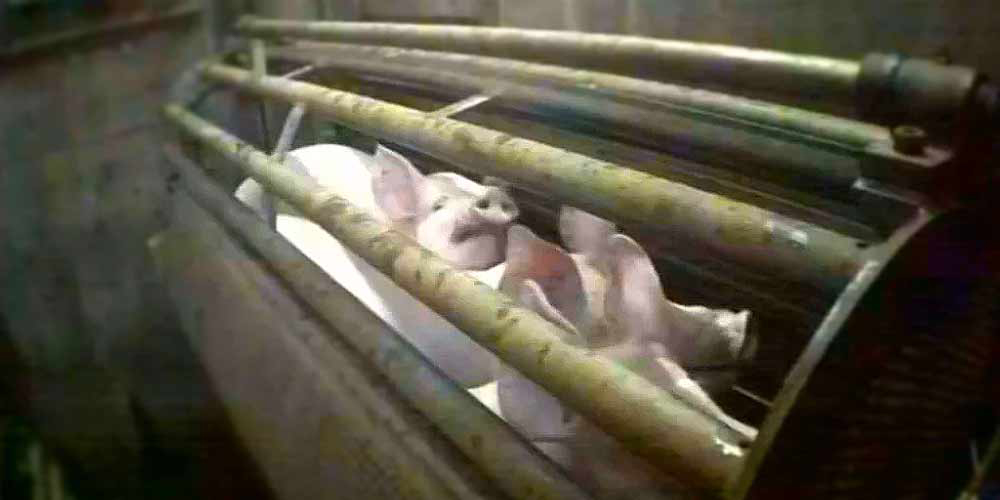 Pigs are incredibly sensitive to the feelings of others around them. While transport is inherently stressful for all animals, the fact that pigs are unable to be ‘herded’ makes it more difficult to move groups of them in a desired direction, putting them at additional risk of abuse from the frustrated workers who are under immense pressure to work as quickly as possible. Footage taken from inside the most ‘humane’ — and the biggest — pig slaughterhouse in Australia revealed the extreme distress that these sensitive animals endure in their final moments inside gas chambers.

If you think these lovely pigs deserve a better life than the experience they're living on factory farms, just remember: You can help free all animals from factory farms!

The simplest way to take a stand against factory farming cruelty is to stop buying or eating factory farmed products. And the great news is that choosing to live compassionately couldn't be easier. Simply by making informed, every-day choices to live kindly, you have the power to make a lifetime of positive difference to animals everywhere.