7 shocking claims in 'What the Health' (documentary)

Makers of the award-winning film 'Cowspiracy' have released a second ground-breaking documentary. Watch the trailer above.

You can stream What the Health on Vimeo now. If you've already seen it, or just want to know a bit more about it, we've pulled out some of the most disturbing stats to take a closer look: 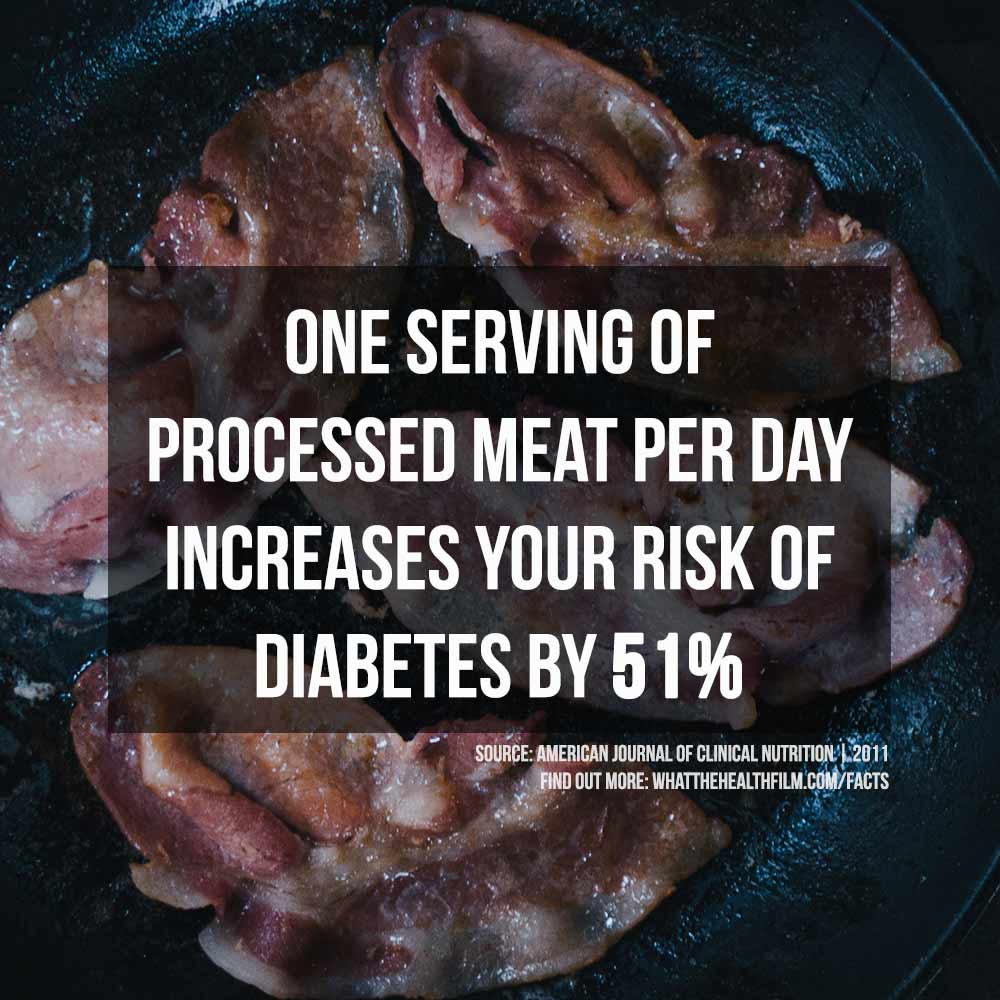 There are no redeeming qualities for processed meats. As well as increasing your chances of diabetes and heart disease, the World Health Organization classifies them as a group 1 carcinogen, the same class as tobacco smoking and asbestos. 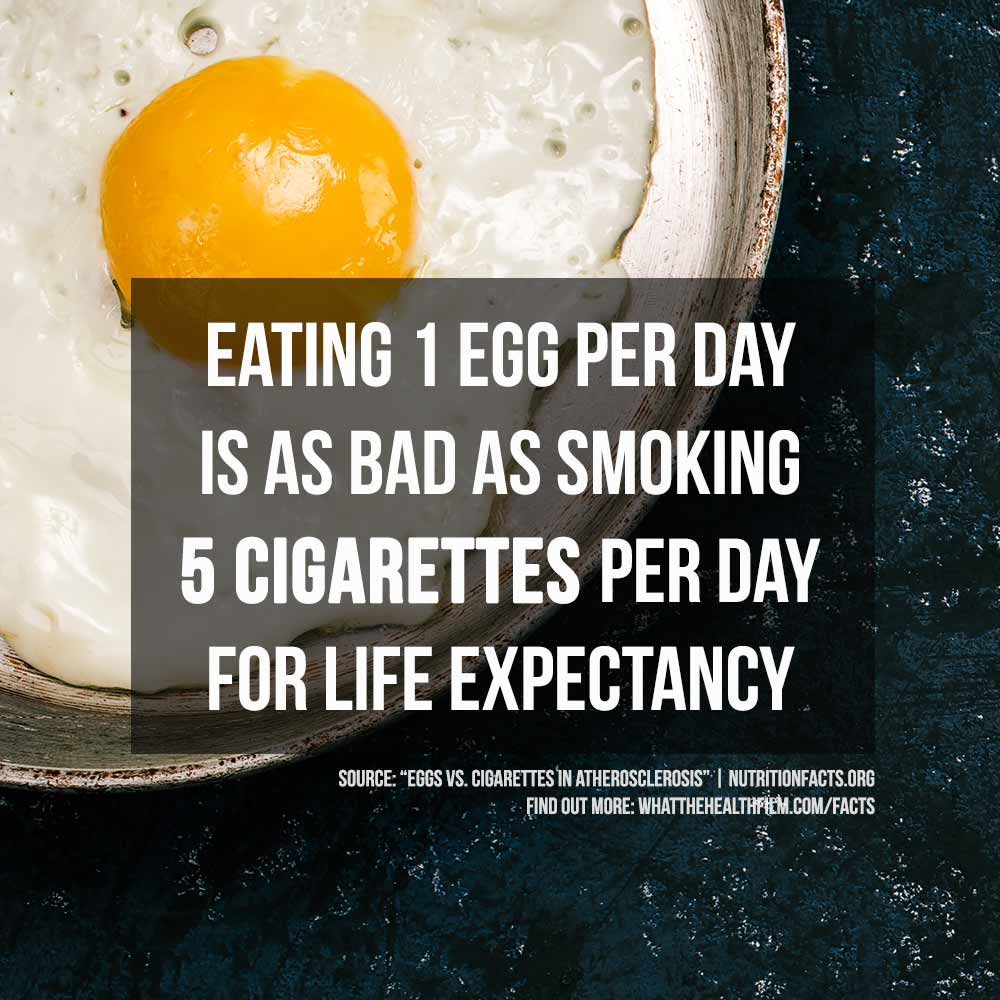 Did you know that the egg industry in the US can no longer label eggs nutritious, low fat, part of a balanced diet, low calorie, healthful, good for you, or safe? Eggs have very high cholesterol and fat content. In fact, research shows that eating just 3 eggs or more per week is associated with a significant increase in artery clogging buildup in people's carotid arteries — a strong predictor of stroke, heart attack and death. The research found a similar exponential increase in artery buildup for smokers and egg-eaters. 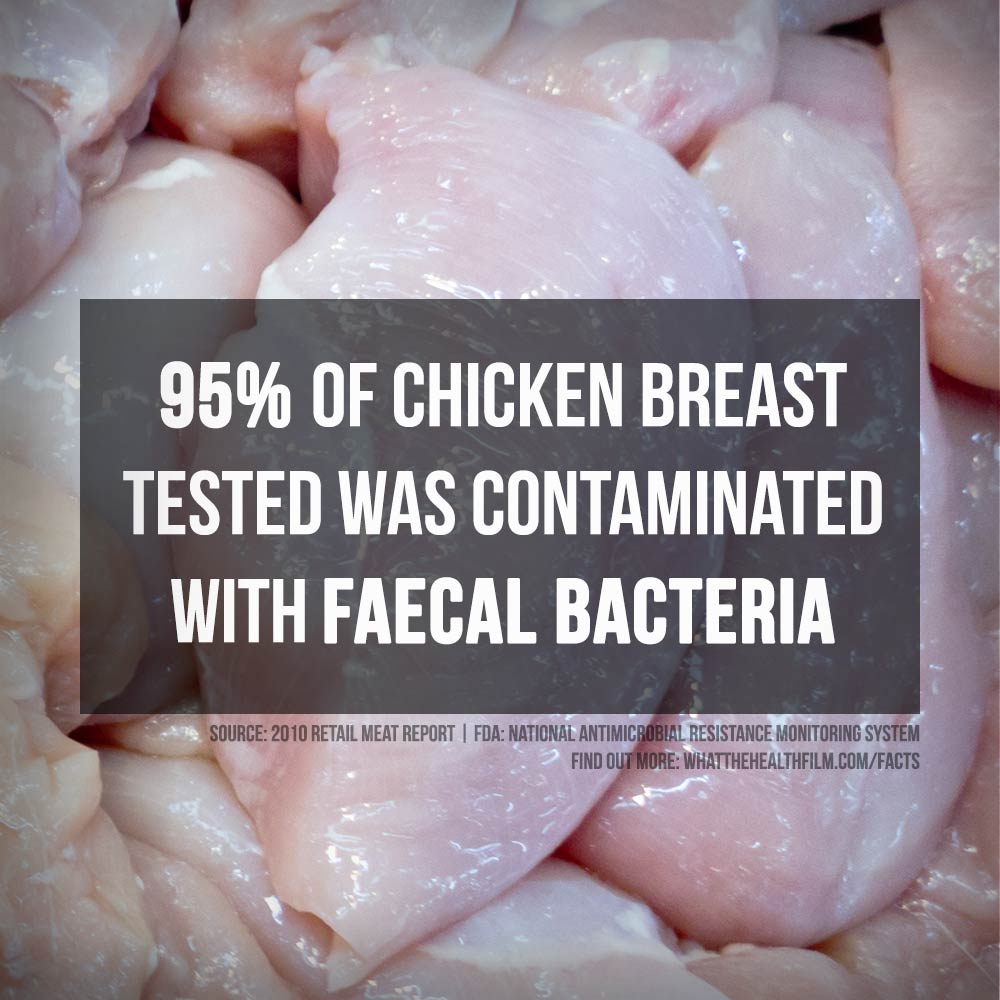 The vast majority of chickens raised for food are kept in conditions that are so cramped and filthy that food and water is easily contaminated with excrement. Testing conducted in the US also found faecal bacteria in 88% of pork chops and 90% of ground beef. 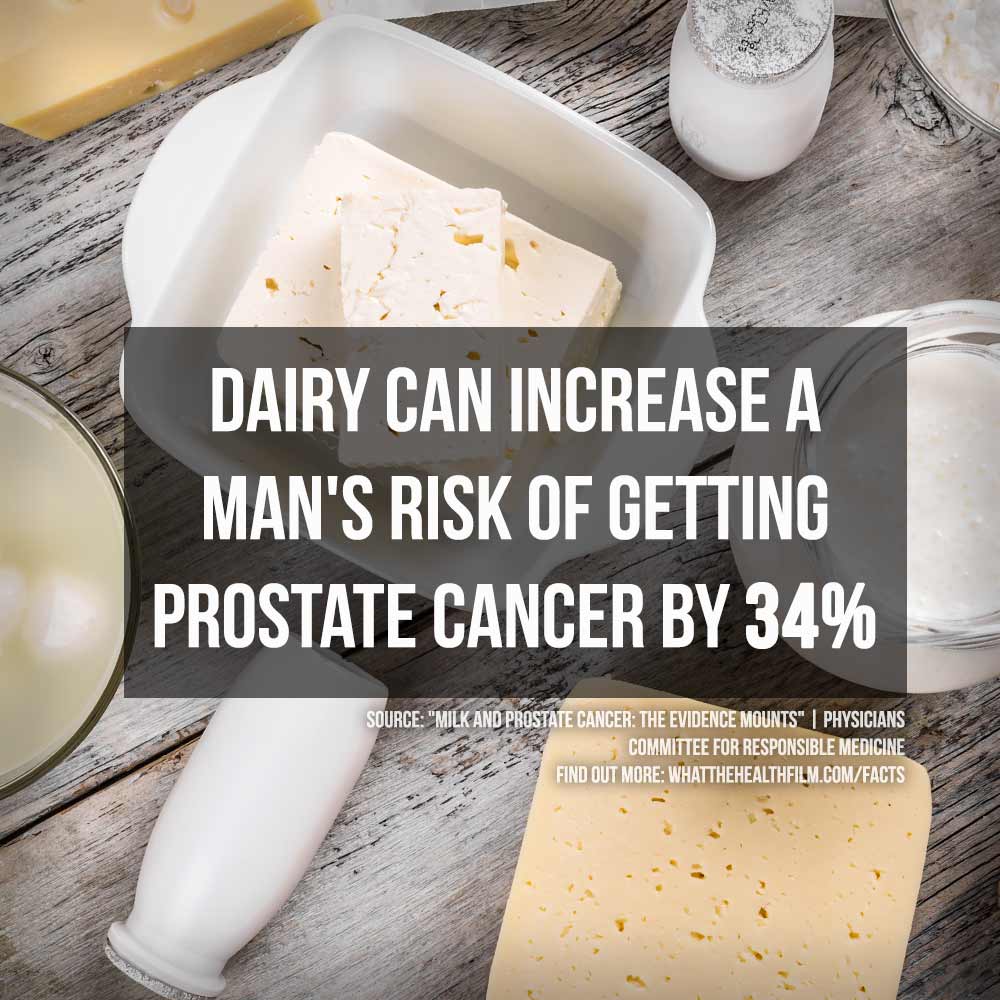 Harvard’s Physicians’ Health Study followed 20,885 men for 11 years and found that having 2.5 dairy servings each day boosted prostate cancer risk by 34%, compared to having less than half a serving daily. Studies have found that dairy boosts the amount of insulin-like growth factor (IGF-I) in the blood which promotes cancer cell growth.

It's not surprising that milk might affect the growth of cancer cells when you think about the fact that dairy milk's sole purpose is to support the rapid growth of a newborn calf. After the age of weaning, calves (like all mammals) have no need for milk at all. Humans are the only mammals who drink the milk of another species after being weaned.

Other studies have suggested a link between dairy and breast cancer as well. One study found that for women who have had breast cancer, just one serving of dairy per day can increase their chance of dying from the disease by 49%. 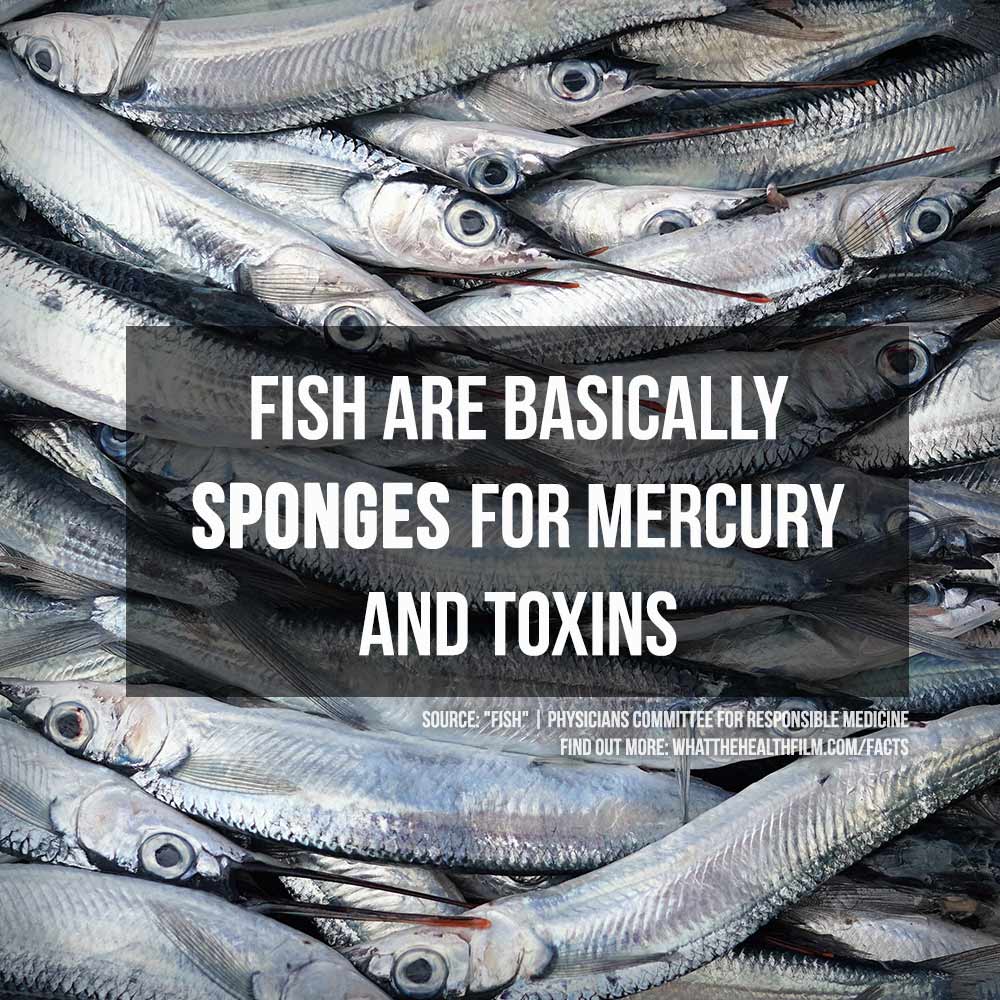 Mercury, PCBs, pesticides and herbicides accumulate in the flesh of fish. Nearly all fish contain some mercury and fish consumption is the leading contributor to mercury contamination in humans. Mercury has been linked to severe cardiovascular and central nervous system problems, including increased rates of death from heart disease and brain shrinkage in babies. PCBs have been known to disrupt immune function, cause learning disabilities, and disrupt neurological development.

Farmed fish, prone to disease and infection due to poor living conditions, are pumped full of antibiotics, which also accumulate in the flesh of fish and are then consumed by humans. Farmed salmon is possibly the greatest source of toxic dietary pollutants consumed by humans. 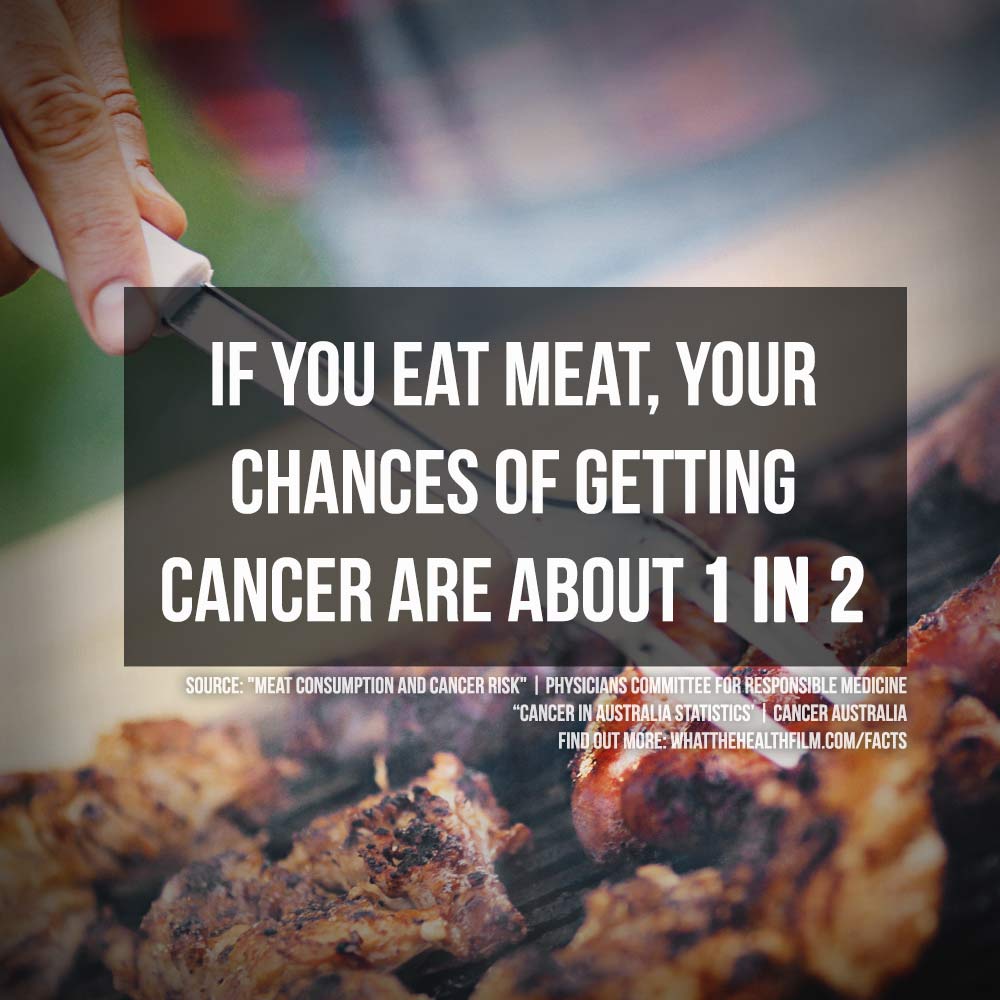 Cancer Australia confirms that the chances of being diagnosed with cancer before the age of 85 are the same in Australia as they are in the US — about 50%. Studies have linked meat consumption to higher incidences of breast, prostate, colorectal, kidney and pancreatic cancers. Meat consumption has also been linked to an increased risk of developing diabetes.

Studies show that people who remove animal products from their diet have a significantly lower risk of cancer, diabetes, obesity, heart disease and stroke. 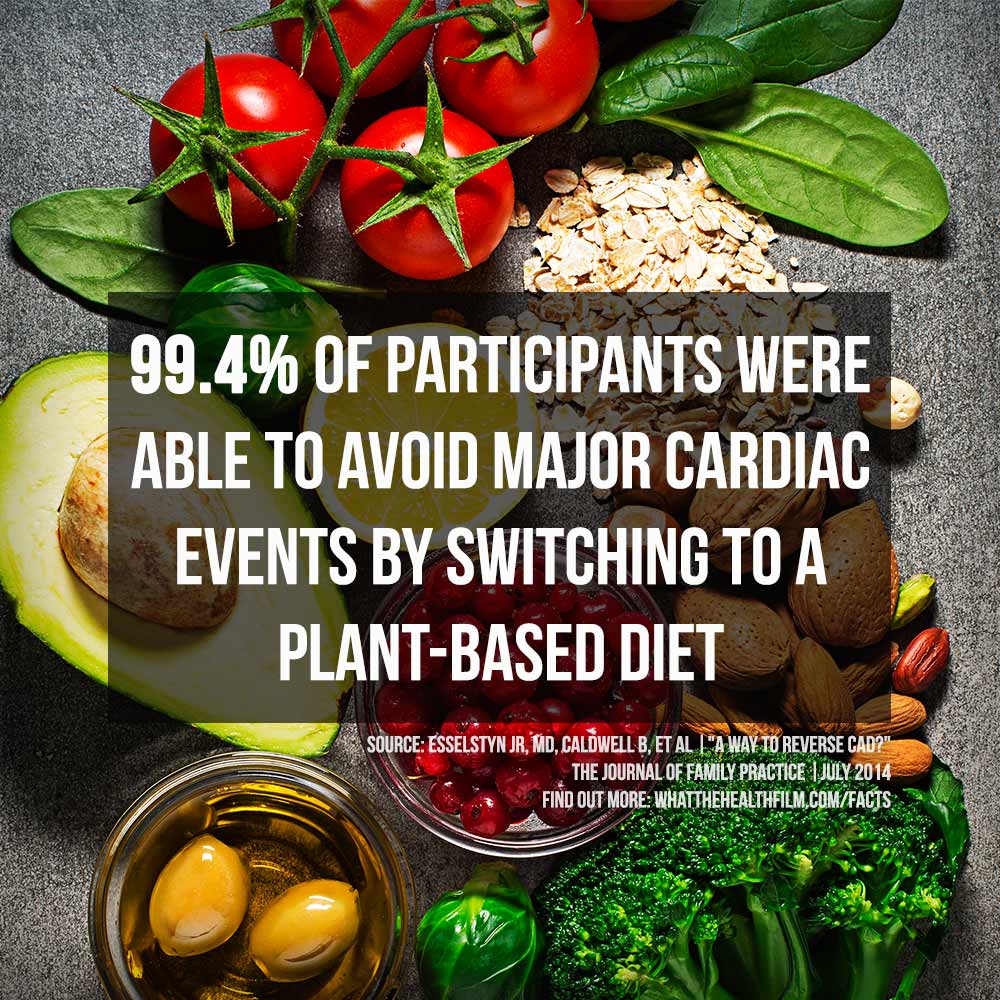 When people adopt a plant-based diet, their blood pressure comes down, their cholesterol levels plummet and arterial plaque starts to go away.

The data is crystal clear — you can stop and reverse heart disease with plant-based diets.Dr. Joel Kahn M.D

If some of these statistics surprised you, you might be wondering why you haven't heard about the correlation between food choices and serious health concerns before. Film-maker Kip Anderson had the same questions and after some investigation discovered that the meat and dairy industries are responsible for providing nutritional guidelines and educational tools about their products. Sadly, similar conflicts of interest can be found with very little digging in Australia. The government endorsed dietary guidelines which Australians are encouraged to follow for optimum health received submissions from both Dairy Australia and Meat and Livestock Australia and were reviewed by a board with affiliations to these same two industry bodies. What's more, educational programs designed to teach us about healthy choices are often 'partnered' with the very companies selling products which may be making us sick.

To find out everything that the meat, egg and dairy industries don't want you to know, watch What the Health online, and share this with family and friends.

How to enjoy a healthy plant-based life!

Vegan bodybuilders: changing the world one rep at a time