What does the label really tell you about the way pigs raised for meat are treated?

Most pork products sold in butchers and supermarkets come from pigs confined in factory farms. These animals are afforded no quality of life whatsoever. With growing community concern about how pigs raised for food are being treated, the lives led by these animals has become a key consideration in purchasing decisions.

There are no simple, consistent or legally enforceable definitions for pig production systems in Australia. This has led to a complex and confusing collection of logos, labels and industry and retailer certification systems. In the tables below, we have attempted to demystify pork production methods to assist more people to make kinder choices.

While living standards will vary, the most significant difference between 'factory farmed' and 'free range' in terms of prolonged animal suffering is the treatment of the mother pig — whether she will be severely confined for much of her life or provided with space outdoors to express her natural behaviours.

But all pigs — in all production systems whether factory farmed or organic — will ultimately face the same terrifying fate inside an abattoir — usually in a 'gas stunning' chamber. This is the grim reality of pig production that is leading to more and more people taking pigs off their plates all together.

Certification systems included in the table:

If the production system isn't specified on the packaging, the pig was almost certainly factory farmed.

In response to consumer concern about animal welfare, major retailers have established their own specifications for the production of the pig products they sell. These are primarily the industry standard, plus some additional requirements.

The RSPCA Approved system accredits pig farms to RSPCA standards. Pigs on these farms can be raised in an outdoor system ('free range' or 'bred free range') or indoor system. Pigs in an RSPCA Approved indoor farm have no access to an outdoor area. However, the welfare standards are higher than in conventional factory farms.

On 'bred free range' farms or 'outdoor bred' farms, sows and boars range freely outdoors in a free range system. The piglets are born in the free range system and live there until they are weaned (which is normally around 3-5 weeks of age) and are then placed into an indoor system which can be intensive indoor housing (factory farming) or a 'higher welfare' system such as an RSPCA Approved indoor farm.

The RSPCA Approved logo accompanied by the term 'bred free range' also indicates the product came from pigs raised in this production system.

Unfortunately, there is no legal definition of the term free range in Australia so standards between farms can vary. These logos indicate that the pigs were raised on a true free range farm.

Certified organic pig products come from pigs kept on farms which meet and exceed standards in the best free range facilities. However, simply the word 'organic' on packaging can sometimes mislead people to think the welfare of pigs meets certified organic standards — when it may simply mean that pigs are fed organic feed. These logos on the packaging indicate that the pigs were raised on a certified organic farm.

These are labels you will commonly find in most major retailers. You'll see that the production method isn't specified. That means that the pigs were raised indoors, and the standards will vary according to what we have outlined in Table 2.

'Australian Pork' is the industry's peak body and this logo will usually appear on 'fresh' pork products; the meat will be from Australian pigs (not imported meat). However unless accompanied by the term 'free range' or 'outdoor bred', this label means the pigs were raised according to APIQ Indoor standards outlined in Table 1.

Other claims and logos

There are other phrases and logos used on pig products that may be perceived to suggest higher welfare such as 'All Natural', '100% Australian grown pork', 'Australian made', or the 'Australian Pork' logo as depicted above. The majority of these do not signify a higher standard of welfare. If the production method isn't stated on the packaging, the pig was almost certainly factory farmed.

It is important that consumers are aware that there are ethical and welfare issues common to all pig farming systems — including certified free-range and certified organic.

Regardless of the system the pigs are born and raised in, they will be transported and slaughtered in similar facilities at a young age. Whilst pigs would normally live to an average age of about 10 years, pigs destined for slaughter will be killed between 4 and 12 months of age. The mothers used for breeding (sows) are trapped in a cycle of suffering to give birth to as many piglets as possible until her body can no longer physically cope and she is sent to slaughter too — in factory farms this is usually between 2 and 3 years of age. 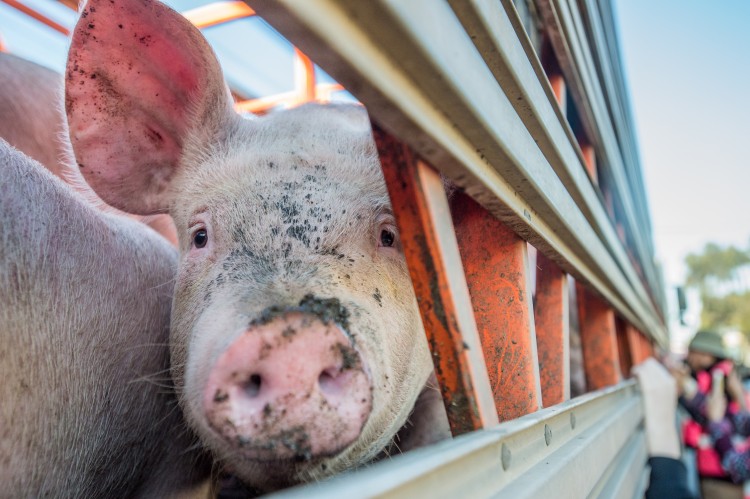 The transport and slaughter process is inherently stressful for the animals. Herded together in trucks to be transported for often many hours without room to lie down is a traumatic experience. And what happens when they get to the slaughterhouse, is even worse. The vast majority of pigs in Australia — regardless of the farming system they came from — will be killed via 'gas stunning'.

To fuel the demand for bacon, pork and ham, thousands of young pigs are forced into carbon dioxide gas chambers every day — despite science confirming that the gassing method outlined in the Australian meat industry standards is likely to cause distress and suffering.

Current demand for pork, bacon and ham in Australia can only be met by factory farming. But this demand would never have existed if people knew the truth about how animals are being treated. Refusing factory farmed products is an important first step to eliminating some of the worst cruelties inflicted on pigs. But to end factory farming, animals urgently need caring consumers to also make the choice to eat less or no meat.

And these days, it's easier than ever! As consumers become aware of the ethical issues relating to pig farming and slaughter, more and more are choosing plant-based alternatives to pork, ham and bacon that are readily available in most supermarkets.