Ducks need water to live healthy and happy lives. Yet ducks on Australian duck farms are being deprived of water to swim and clean themselves in.

Just like chickens, the majority of ducks raised for meat in Australia live in crowded and filthy conditions in factory farms.

But, ducks also have a very specific need that most farms (including free range) do not meet — ducks need water. And lots of it.

Ducks are aquatic animals. They spend much of their life on water, and have naturally weak leg joints. In farms, ducks are given no access to water to swim or bathe in. They are forced to use their legs to carry themselves for the 7 weeks of their life before they are sent to slaughter. This causes frequent lameness, dislocation and broken bones amongst ducks on farms. Build up of urine and faeces on the floor of factory farms makes the surface slippery and increases the chance of ducks injuring themselves.

The lack of sufficient water also prevents ducks from being able to clean themselves properly, leaving them vulnerable to heat stress, infection and a disease called 'crusty eye' which can leave them blind.

European welfare standards recognise that farmed ducks must be provided with sufficient water for hygiene and swimming.[1] Most duck farms in Australia are failing to deliver even this most basic welfare requirement for ducks.

You can spare ducks and all animals from cruelty and slaughter by choosing plant-based meals. Get recipes and tips to get your started in our free veg starter kit.

Most ducks sheds are not cleaned for the entire time ducks live in there. Without access to pools of clean water for bathing and exercise, ducks can quickly succumb to a range of debilitating medical conditions. Unable to clean a toxic build-up of excrement off themselves, ducks in these sheds are frequently afflicted by ammonia-related conditions such as chemical burns, respiratory infections and footpad lesions.[2] 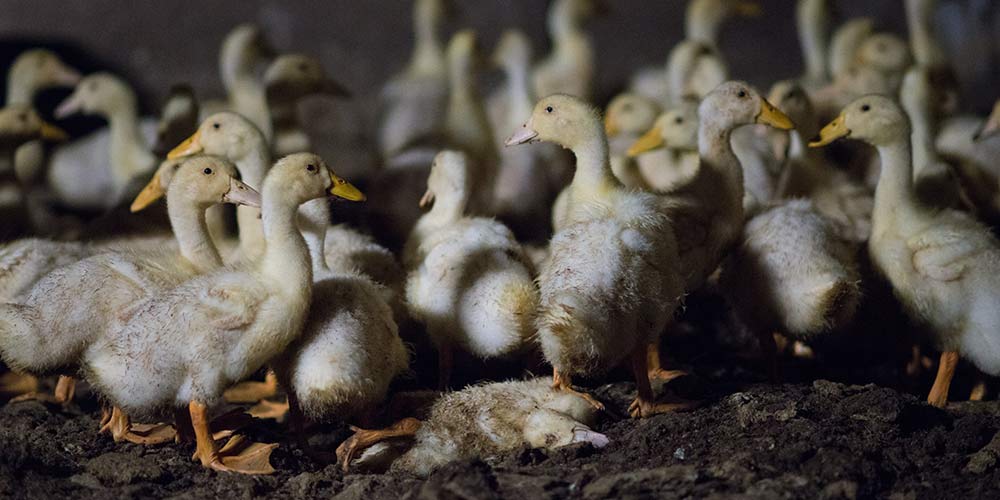 Eye infections or 'crusty eye' are a common occurence for ducks in duck farms, and are largely left untreated. Injuries and abrasions on their legs and feet are also common as they have delicate feet which are not designed for walking on rough shed floors. The resulting open wounds leave them highly susceptible to a range of infections.

The most common infection ducks suffer from on commercial farms is a blood disorder called anatipestifer disease. Ducks who contract this disease can suffer from diarrhoea, tremors, trouble breathing, paralysis, convulsions and death. In most affected flocks, an average of 5% — 30% of birds will die from the disease, but in some instances up to 75% of birds may die.[3] The cramped and dirty conditions of sheds on many duck farms provide the ideal environment for disease to spread, through small cuts and scrapes on ducklings' sensitive feet. 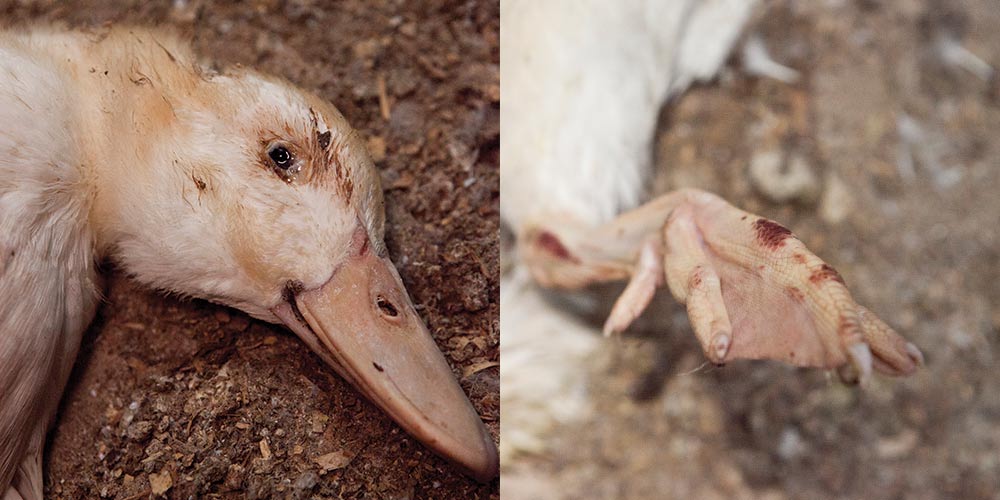 Ducks who have been selectively bred for fast weight gain to meet 'production demand' experience extraordinary pressure on their heart, lungs and legs. This can result in difficulty breathing and standing up, joint pain, dislocations and fractures. A condition called Ascites — in which ducks are variously affected by hypertension, suffocation on their own internal fluids, or sudden death — is also a 'side-effect' of selectively breeding animals to grow unnaturally fast.[4] 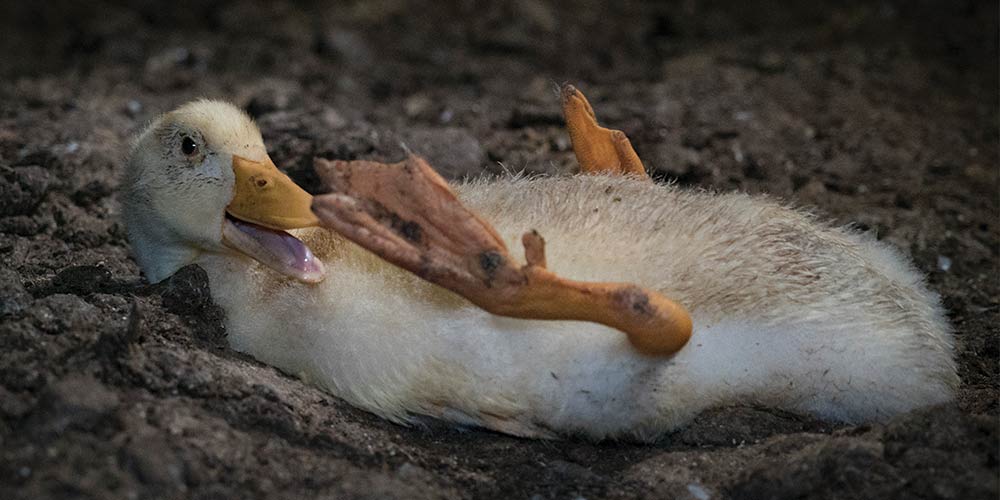 It is still legal in Australia for ducks to have the tip of their beak cut off without pain relief. This is done for the same reason battery hens face this cruel procedure: to prevent injuries if they peck each other — a common behaviour resulting from severe stress and close confinement. In some instances this mutilation can result in life-long pain.[5]

'Breeder' ducks are also confined to factory farm-like sheds. Living under long hours of artificial lighting, they are forced to breed almost all year-round. They produce up to 100 eggs a year, and all of them are taken away as soon as they are laid. This unnatural and intense laying cycle can lead to female ducks suffering painful health problems with their reproductive organs.[6]

Most ducklings start their life in 'hatcheries' and never meet their mother. Newborn ducklings who appear too weak or unhealthy to be sent to the farm with the others are thrown into giant metal macerating machines and ground up alive. This is common practice in hatcheries — for chicks too.

Ducks who are farmed are often roughly handled — groups of young ducklings, for example, may be grabbed and even picked up by their necks.[7] While the government recommends that only trained workers should be allowed to handle ducks,[8] no duck handling training is currently legally required on duck farms in Australia.

Ducks in the wild can live anywhere from 5-20 years, but most farmed ducks are killed at just 7 weeks of age. At the slaughterhouse, these young ducks are shackled by their legs and hung upside down. This puts immense strain on their weak leg joints, and can even result in dislocation. Their heads are then dunked into a tank of electrified water to stun them, before their throats are cut.[9] But ducks don't always have their heads fully immersed in the electrified water, and these unfortunate birds can have their throat cut whilst still fully conscious.[10]

Sadly, wherever animals are handled or slaughtered en masse, there will be fear and suffering. This is the reality of raising and killing animals for food.

It's no wonder that 1 in 3 Australians are reducing their meat consumption or eating meat-free. With more and more restaurants and supermarkets adding tasty meat-free options, it's never been easier. Get started eating plant-based meals today with a free veg starter kit.

What about free range?

If the production system isn't specified on the packaging, the duck almost certainly lived her life in a factory farm. According to the PoultryHub website[11], approximately 8 million ducks are slaughtered for food each year in Australia. The vast majority of these ducks are raised by the two major duck-meat producers — Pepe's Ducks and Luv-a-Duck. Only a very small number of ducks raised for meat in Australia live their lives on free range or organic farms.

Like those in factory farms, ducks in free range farms are denied access to water to swim or clean themselves in. Neither of the largest free range accreditation bodies in Australia require farms to provide ducks with adequate water to swim and bathe. In fact, investigations into several 'free range' duck farms in Victoria have found ducks living in conditions very similar to that of factory farms.

Certification systems included in the table above:

A note on 'free range': Unfortunately, conditions in free-range duck farms can vary dramatically. While the two largest free range accreditation bodies — FREPA and Humane Choice — require ducks to be given access to an outdoor space, neither of them explicitly require the provision of sufficient water pools, streams or troughs for swimming and cleaning: the lack of which constitutes the single greatest welfare concern for ducks.

A note on 'organic': While Australian 'Certified organic' (ACO) ducks are kept on farms which generally meet or exceed the standards of free range facilities, it should be noted that the word 'organic' on its own (i.e. without the word 'certified') can sometimes mislead people into thinking the welfare of ducks meets certified organic welfare standards — when in reality it may simply mean that ducks are raised on organic feed.

Selective breeding & fast growth: FREPA does not specify rules regarding selective breeding. While Humane Choice disallows genetic modification, they do permit the selective breeding of ducks. ACO recommends a preference for slower-growing species, but this is only a recommendation and it is not clear if this is adhered to or enforced.

Beak cutting: Cutting the tip off ducks' beaks is permitted by FREPA standards when approved by a veterinarian. ACO standards do not permit beak cutting, unless attempts to manage diet, environment and stocking densities have been trialled and proven ineffective to stop ducks pecking each other. Humane Choice does not allow beak cutting.

Kindness is on the menu with our #1 selling cookbook: Taste for Life

Many thanks to Animal Liberation NSW, whose numerous investigations have provided Australians with an insight into the lives led by ducks on commercial farms.

[1] VIVA! USA, 'Ducks out of water: a report on the duck industry in the USA'. Retrieved from: http://www.vivausa.org/campaigns/ducks/duckreport01.htm

[2] The Humane Society of the United States, 'An HSUS Report: The welfare of animals in the duck industry'. Retrieved from: http://www.humanesociety.org/assets/pdfs/farm/hsus-the-welfare-of-animals-in-the-duck-industry.pdf

[5] VIVA! UK, Ducks out of Water: A report on the UK duck industry. Retrieved from: http://www.viva.org.uk/ducks-out-water-report-uk-duck-industry

[6] Animal Liberation NSW, 'Like a duck out of water: an exposé of the Australian duck industry', 2013. Retrieved from: http://www.aussieducks.com.au/report

[9] Animal Liberation NSW, 'Like a duck out of water: an exposé of the Australian duck industry', 2013. Retrieved from: http://www.aussieducks.com.au/report

[10] The Humane Society of the United States, 'An HSUS Report: The welfare of animals in the duck industry'. Retrieved from: http://www.humanesociety.org/assets/pdfs/farm/hsus-the-welfare-of-animals-in-the-duck-industry.pdf