The reality of dairy: killing calves

We think of cows as producing a constant flow of milk. But, as with any other mammal, a dairy cow only produces milk when she has a baby to feed. What happens to those babies is perhaps the dairy industry’s darkest secret.

Cow’s milk and other dairy products are an everyday part of life for many Australians. But how much do we really know about how these products got from the farm to the fridge? The reality is that every dairy cow is a mother. But in the dairy industry, 'motherhood' is anything but 'natural'.

Most people aren't aware that in order to produce milk, dairy cows are kept almost continually pregnant. Unwanted male calves (known as 'bobby calves') are slaughtered in their first week of life so that their mothers' milk can be harvested for human consumption. This is the true cost of dairy, and it’s only part of the story...

Every year, hundreds of thousands of Australian ‘bobby calves’ are either sent to slaughter (more than 2 million over the past 5 years) or are killed on farm in their first week of life so that the milk intended for them can instead be collected and sold to humans. Considered economically insignificant, male calves, and the females who are excess to the dairy industry's needs, are separated from their mothers on their first day of life. From as young as 5 days old, they can be loaded onto trucks and sent to saleyards or slaughterhouses. 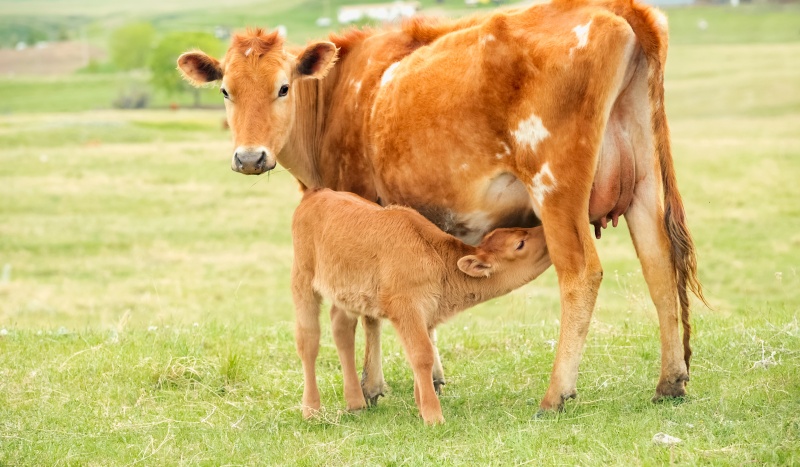 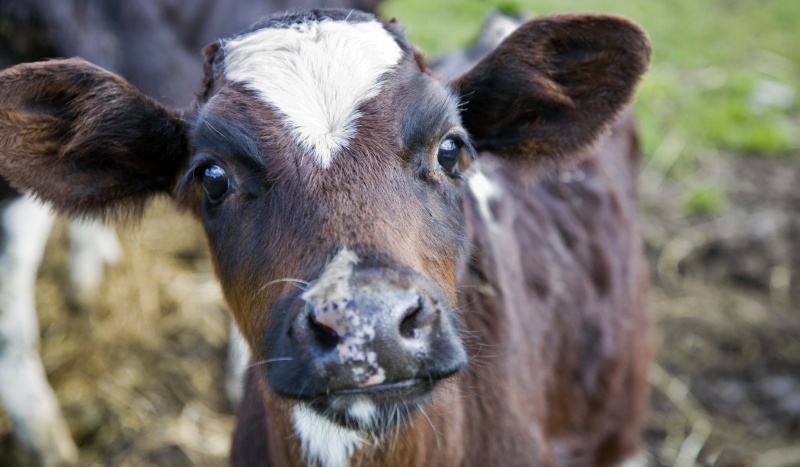 Like humans, a mother cow bonds quickly with her calf. So, when he is taken away from her, both mother and calf can often be heard calling out for each other.

Cows are renowned for their maternal instinct. Like humans, a mother cow bonds quickly with her calf. So, when he is taken away from her, both mother and calf can often be heard calling out for each other for hours. In heart-wrenching scenes, cows have been witnessed chasing after a trailer carrying their calf away. Mothers have been known to grieve for days after their calf is removed, bellowing loudly in distress.

To make matters worse, dairy cows are kept almost continually impregnated. Each year, she is forced once again to go through the physical demands of pregnancy and calving only to once again face the stress of having her newborn calf taken away — all to enable her continued milk production.

At just five days of age, the unwanted calves may still be weak and unstable on their feet. Yet they are made to clamber up ramps and onto trucks. Their immature hooves often slip on these metal ramps and can even fall between the slatted flooring designed for older animals. Faced with unfamiliar sights, sounds and demands, these young animals don’t understand what is being asked of them which makes the transport process incredibly stressful. Investigations have shown frustrated stockmen shoving, hitting, shouting at and even throwing bewildered calves on and off trucks. Current laws allow these young animals to be trucked for up to 12 hours, without a break.

Calves can be deprived of food (milk) for the last 30 hours of their life. This means that they can be fed in the morning, then transported and kept at the slaughterhouse overnight without any food before being killed the next day. To go without food for such an extensive period of time has an enormous negative impact on the wellbeing of these young animals – coupling a feeling of hunger with the already stressful event of transport and being away from their mothers. While calves normally suckle about 5 times a day, the Australian Standards for transporting animals fail to require them to be fed and so allow them to go hungry for the last hours of their short lives.

Numerous investigations in Australian slaughterhouses have documented the terror dairy calves face prior to and during the slaughter process. It’s the final cruelty for these babies who have been born – and killed – for one reason; to keep their mothers producing milk for humans.

Those female calves who are kept to replenish the dairy herd will undergo painful on-farm procedures, such as ‘disbudding’. Calves may have a hot iron pressed into their head, to damage the immature horn tissue (called buds) and prevent them from growing horns; or have the horn bud scooped out; or have caustic chemicals applied to burn the emerging horn tissue. Despite disbudding being immensely painful and distressing for calves, it is usually done without any pain relief.

If dairy calves are not 'disbudded', older dairy cattle may be 'dehorned'—an extremely painful and distressing procedure that also carries a higher risk of infection and even blowfly infestation in some regions.

Dairy cattle in most Australian states can still also legally have up to two-thirds of their tail removed using a rubber ring, sharp knife or hot docking iron, though the Cattle Standards and Guidelines (agreed in 2016) will prohibit this if and when adopted in each State. While self-reports by farmers suggest this procedure is not commonly performed in the Australian dairy industry, those cows who do have their tails ‘docked’ experience acute and chronic pain, can develop infections and are unable to swat away flies from their hindquarters.

To make the birth of new calves into the herd occur over a convenient time period, some dairy farmers induce labour in pregnant cows, so that they will deliver their calves earlier than full-term. This is done despite the fact it puts the cow at greater risk of uterine infection, and even death.

Induction also affects the health of the calf. Many calves who are born early are unable to survive and are immediately killed. They may be shot in the head, using a captive bolt to the brain; or may be killed using blunt trauma to their skull. Sadly, calving induction continues and is legal, despite most dairy farmers successfully managing calving without such intervention. The Australian dairy industry policy is for a (voluntary) phase out of this practice by 2022, but the Cattle Standards and Guidelines permit the practice.

Selective breeding and, more recently, genetic manipulation, has resulted in the selection and production of cows who produce enormous amounts of milk. The average amount of milk a cow produces annually has more than doubled in the last 40 years. The modern dairy cow can produce about 28 litres of milk per day—that’s fourteen 2 litre cartons of milk and about ten times more milk than her calf would need.

Producing large quantities of milk puts a significant metabolic strain on the animal. The great weight of the udders often causes painful stretching or tearing of ligaments and frequently causes foot problems, such as laminitis. These foot problems can be associated with significant pain. Dairy cattle are also susceptible to infections of the teat and udder (mastitis), which can be very painful. 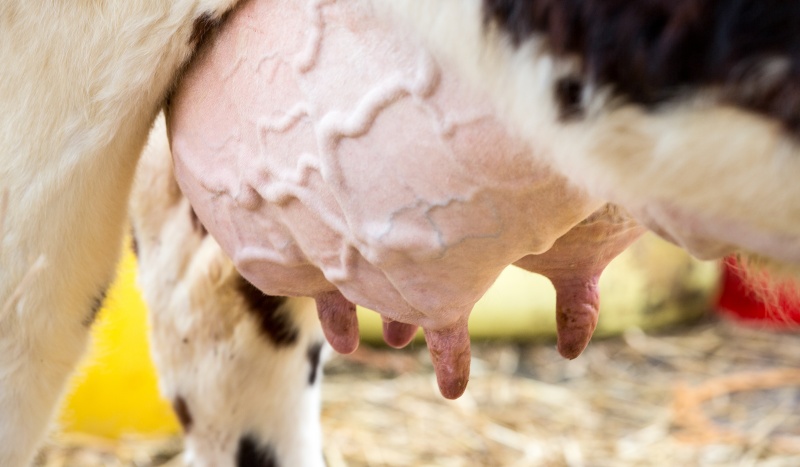 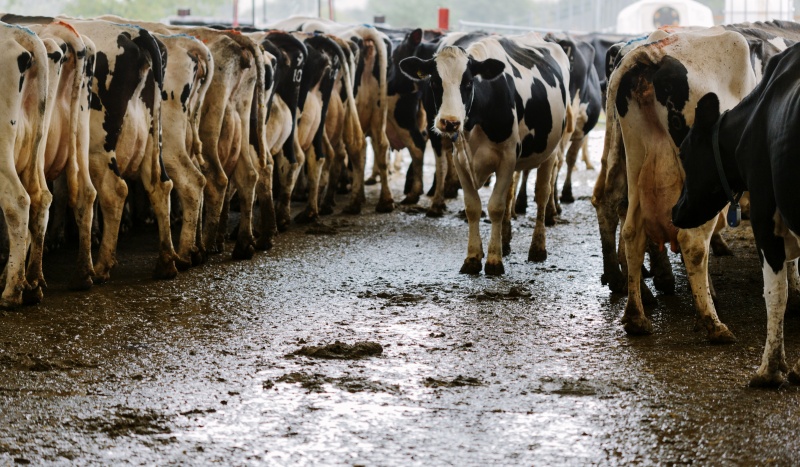 Selective breeding and genetic manipulation has resulted in cows who produce enormous amounts of milk. The great weight of the udders often causes painful stretching or tearing of ligaments, and cows can suffer painful mastitis.

It is not only cows and calves who are impacted by routine practices in the dairy industry; inevitably, so too, are dairy farmers and their families. They witness first-hand the emotional impact that calf separation has on cows and calves. Harvesting milk for human consumption requires farmers to regularly kill baby animals or hand feed them for up to a week before sending them to be slaughtered. Having to deeply repress their emotional instincts and compassion cannot occur without a psychological toll. One study cited that the human impacts of such practices included depression, anxiety and grief.

A significant 2018 study from Oxford University published in the eminent journal 'Science' found that producing one glass of dairy milk every day for a year requires a parcel of land the size of two tennis courts – 10 times more land than is needed to produce a glass of oat milk, and vastly more than soy or other plant-based milks.

This same study found that dairy production uses vastly more water and produces more greenhouse gases than the many plant-based alternatives on offer; and concluded that avoiding meat and dairy is the single biggest thing we can do to reduce our impact on the earth.4


The new research shows that without meat and dairy consumption, global farmland use could be reduced by more than 75% — an area equivalent to the US, China, European Union and Australia combined — and still feed the world. Loss of wild areas to agriculture is the leading cause of the current mass extinction of wildlife.The Guardian, 31 May 2018 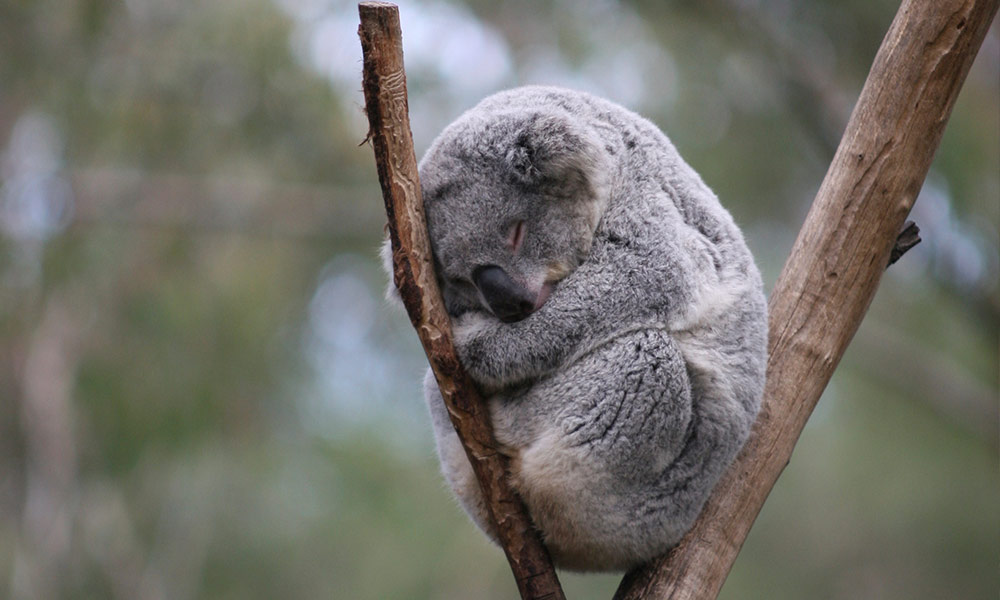 Your kind choices are powerful

On any carton of dairy milk in the supermarket, you can read the fat, protein, and calorie content. But the packaging won’t tell you the full story of how the milk ended up in that fridge. A story of grieving mothers, of babies killed as waste products, and of quelled human compassion.

But as consumers, we have the power to choose milk that has a different story. And with the ever-expanding range of calcium-rich and dairy-free products available in supermarkets, it’s never been easier to be deliciously dairy-free.

By making conscious, kind choices, not only can we create different business opportunities for farmers; we can help shape a kinder world – for humans and animals.

While the problem of 'disposing' of unwanted calves is the same across the whole dairy industry, you have the power to help protect calves and their mothers from cruelty.

Click to explore the amazing range of delicious dairy-free alternatives, which are readily available.

1 in 6 Australians are choosing dairy-free!